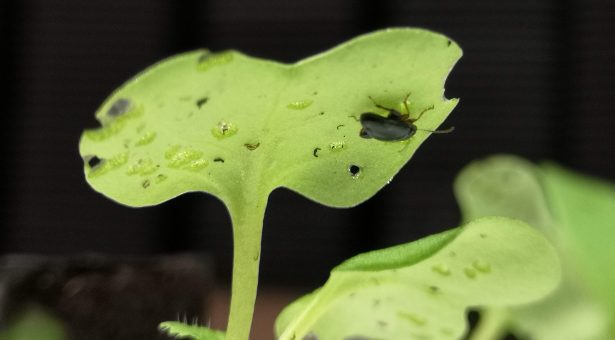 UK crop losses due to cabbage stem flea beetle were estimated at 5.4% in 2016/17 equivalent to 31,000 ha-1 and as high as 15% for some counties. Losses in yield of up to 20% have been reported with farmers choosing to plough in the crop if damage is too great.

This pest is becoming increasingly problematic since the withdrawal of neonicotinoid-based pesticides which were previously used for control. As such, growers and breeders of oilseed rape have expressed their concerns over this pest and what it could mean for the future of UK oilseed rape, with a decline seen in UK cropping area of 35% between 2012 and 2019.

The John Innes Centre has the benefit of an outstanding Entomology department which has allowed us to develop the first in house breeding population of cabbage stem flea beetles, enabling us to conduct research into their life-cycle and feeding preferences.

Discussions between scientists and industry have led to the development of a research programme aiming to identify material resistant to cabbage stem flea beetle to aid future breeding programmes.
This research programme has initially been funded through two PhD research projects which use our breeding population of the beetle to develop integrated pest management approaches. One PhD project is funded by Limagrain, the other by the Agriculture and Horticulture Development Board (AHDB).

Further communications with industry led to the successful application for a BBSRC Industrial Partnership Award which was financially supported by seven plant breeding companies with an additional contribution from the AHDB alongside the BBSRC. This research programme began in 2021 and it is anticipated that this project will identify genetic markers that can be used by breeders in the development of oilseed rape varieties that are less palatable to the beetle.

One of our key findings to date is the identification of two oilseed rape lines which are less palatable to adult flea beetle.

Industry engagement is a crucial two-way process for these projects. They allowed PhD students Jessica Hughes and Lucy Thursfield to discuss on-farm beetle behaviour with farmers as well as allowing them to collect new beetles for the insectary.

Farmers and breeders are also excited by the results, with our scientists receiving regular requests to participate in industry conferences and meeting such as Croptec Show and OREGIN meetings.

Having identified flea beetle resistant lines our research is now focusing on which genes and compounds are responsible for this resistance. Identifying markers for these genes will allow plant breeders to incorporate these genes into varieties of oilseed rape that are under development.

In the Genes in the Environment research programme, regular engagement with industry allows us to get an understanding of the most important challenges faced by growers and industry. Tackling cabbage stem flea beetle was identified as a major challenge for the growers of oilseed rape which was a catalyst for us initiating the cabbage stem flea beetle research programme.