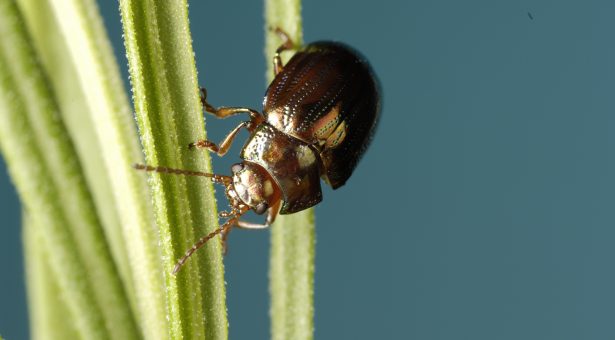 Work Experience student Archie Clarke was recently given a tour of our Entomology and Insectary and department, by our Entomology Facility Technician, Susannah Gill, here is what he found:

The Entomology Department and Insectary at the John Innes Centre contains a large range of insects, from the common Peach-potato Aphid (Myzus persicae), to the less common ‘Green Apple’ stick insect (Diapherodes gigantea).

The primary function of the department is to house and conduct insect-related research with an overarching aim to help tackle the issue of global food production.

Within that broad remit, other avenues of plant-invertebrate interactions are explored using in-house populations, including insects’ effects on natural plant defences, insect-borne pathogens, and insect-microbe associations.

All work is carried out in a quarantined insectary under a DEFRA licence, and aims to assess crop protection products and alternative methods in order to advise on how best to protect crops from insects and insect-vectored diseases.

The Entomology department itself consists of several high-containment rooms and areas with specific lighting which deter species from escaping. An added layer of security is provided by the insects within the highest level of containment being prohibited from leaving the facility without first being frozen for a minimum of 24 hours beforehand, ensuring they’re in no state to do any damage.

Ensuring these insects are unable to breach containment is vital; because due to the nature of the crop pathogens being studied, some carry diseases that could devastate the surrounding UK farmland.

We were given a tour of the insectary by Susannah Gill who joined the department after completing her studies at the University of Sheffield. When we arrived to meet Susie, we found her tucked up in a quiet office counting cabbage stem flea beetles in order to monitor their population and assess them as a threat to UK crops. It is hoped that this kind of research could expand on what is already known of this beetle’s biology, in order to inform more resistant crop breeding programmes, and ultimately limit the volume of crop losses it currently causes.

During our tour, Susie informed us that she occasionally must come in on weekends to feed and take care of some of the higher maintenance (and greedier) species in containment. She also said that it’s surprisingly easy to become attached to the animals she cares for, having recently as a result of a new project, developed a particular fondness for slugs. These attachments are unfortunately quite short-lived however, as due to the nature of insect life cycles, populations come and go frequently.

We also learned that the John Innes Centre Entomology department is responsible for providing research institutes all over the world with species and colonies of rare insects. This enables research facilities worldwide to collate their research with the centre by using the same sample insects. This collaborative approach improves the quality and communication of entomological research and facilitate more holistic studies to be carried out.

Finally, alongside active research projects, the Entomology department also plays an important role in public engagement. They regularly host tours for a range of demographics, from school children to visiting scientists, to widen the appreciation of insects. In particular, they provide opportunities to experience and get to know rare or strange insect species, such as the ‘Green Apple’ stick insect, which we were able to hold and discovered that it absolutely lives up to its sticky name…

Thanks to Susie’s tour and in-depth explanations we learnt how crucial insect – pathogen relationships are to plant science, from the understanding gained in order to protect crops by studying cabbage stem flea beetles to the outreach potential of strange insects it’s clear that the John Innes Centre as a whole benefits greatly from the work done in these little rooms.

We are currently looking for an enthusiastic individual to lead and manage the operation of the John Innes Centre Entomology Facility. This will include supporting research on invertebrates and plant/pathogen interactions, as well as developing the facility and its work to ensure future successes.