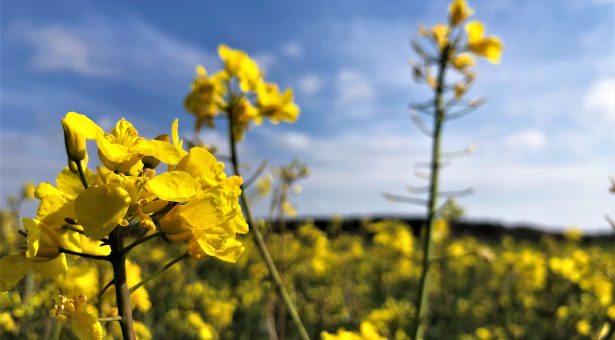 Plants may seem static, rooted to the ground and unaware of what’s happening around them. However, this couldn’t be further from the truth.

Plants sense the world including sensing light, touch, chemicals, microbes, animals and temperature, in unique ways that are often invisible to us.

How plants do this is still not fully understood, but research here at the John Innes Centre is investigating fundamental plant mechanisms, helping us answer the question – how do plants sense the world around them?

Light is a form of energy known as electromagnetic radiation, consisting of a range of waves of varying wavelengths. Plants have special structures called photoreceptors that detect an array of wavelengths, allowing them to sense light.

A wide range of photoreceptors exist including phytochromes, cryptochromes, phototropins and ultraviolet-B receptors that allow plants to detect visible, far red and ultraviolet light. These photoreceptors are found across the plant and are important for a range of vital functions, ranging from the regulation of plant development to the regulation of the plant’s circadian rhythm.

Probably the most well-known function is the regulation of the plant hormone auxin. When photoreceptors detect light, they trigger a signalling cascade that regulates the production of auxin which, in turn, tells plants the direction to grow.

Professor Antony Dodd and his research group investigate the circadian clock, which is in part regulated by photoreceptors. Recent research from the group, in collaboration with Professor Kerry A Franklin’s group at the University of Bristol, showed that one of these photoreceptors – phytochrome A – interacts with the circadian rhythm to prevent plants from growing excessively under deeply shaded light conditions.

Plants have specialised sensory organs known as mechanoreceptors that detect mechanical stimulation like touch and pressure.

Mechanoreceptors in plants often take the form of fine hairs. When these hairs are touched they cause a shift in charged compounds from one side of the cell to the other which is detected as a signal by the plant. If this signal is strong enough, the plant detects this sensation and reacts accordingly.

Bladderworts, are a genus of mostly aquatic carnivorous plants which have specialised leaves that form air-filled traps. They have a trap door and are covered with trigger hair mechanoreceptors.

When unsuspecting prey, generally microscopic crustaceans, touch these hairs they trigger the trap door to open, sucking in the prey. In order to better understand the fundamental mechanisms of how plant leaf shapes are formed, Professor Enrico Coen’s group studies how the shape of these specialised traps develop in Utricularia gibba  – the humped bladderwort – and the genes responsible for creating these complex forms.

A less menacing example are the tendrils of creeping plants, like the pea plant, and other vines. Tendrils are modified leaves that are covered in mechanoreceptors which search around for branches or other support systems. Once a branch is found, these receptors are triggered, causing the vine to twist around for support.

In the 1960s and 70s a research programme led by Brian Snoad developed a leafless pea variety dominated by tendrils and stipules (a modified leaf that is much smaller in size). When grown at high densities this new ‘Filby’ variety had a reduced risk of collapse as the intertwining tendrils provided a stronger support structure for the crop.

Unfortunately, the lack of full leaves meant that less light was captured by the plant and that yields would only be feasible when grown at very high densities, making this leafless pea variety unattractive to farmers. Research to improve pea is ongoing at the John Innes Centre.

Chemical compounds released into the air or from their roots act as a kind of language, allowing plants to communicate with themselves, neighbouring plants and other organisms like microbes and insects.

Detecting these compounds by using receptors found across their leaves and roots, plants use these communication strategies for both beneficial and defensive purposes.

Receptors in roots of legumes, for example, can distinguish between beneficial and harmful bacteria, whereby detection of beneficial bacteria initiates the formation of a symbiotic relationship in which the bacteria provide nitrogen to the plant, whilst the plant provides sugars and other nutrients to the microbe.

If the receptors detect harmful bacteria, then the plants immune response is activated in an attempt to prevent the microbe from colonising the plant. This complex interaction, and the receptors that govern it, is studied by the Dr. Jacob Malone group in collaboration with the Dr. Cyril Zipfel group at The Sainsbury Laboratory and University of Zurich.

Some of these plant receptors are known as disease resistance proteins (NLRs) and work by binding to specific non-self molecules – sensing the presence of potentially harmful and infectious pathogens. Professor Mark Banfield’s group investigate these NLRs from crops, including rice and potato. Understanding this molecular mechanism of pathogen sensing by plants will help in the development of pathogen resistant crops.

Chemical language exists in flowers (and sometimes other regions of the plant) as the volatile mixture of compounds we know as scents. While we bottle them up as perfumes, plants use scents to attract pollinators, some of which are very specific to a particular plant-pollinator relationship. These complex interactions are a focus for Dr. Kelsey Byers’ research group, who are investigating the evolution of genes responsible for scent in flowers such as Monkeyflowers, Orchids, and Bedstraws.

Plant receptors not only detect harmful bacteria, but also detect attack from herbivores too. When under attack, for example from pesky caterpillars and slugs, plants release volatile compounds that warn neighbouring plants that these leaf eaters are close and to start producing defensive compounds to protect themselves from attack.

In some plants these defensive compounds are stored in hairs, called trichomes, found across the surface of leaves and stems. The presence and density of these trichomes are linked to increased resistance to both pests and drought. Professor Cathie Martin’s group are researching the genes involved in the formation of these trichomes in tomatoes, which eventually can be used to increase pest and drought resistance in this crop.

Detection of sap feeding herbivores is harder for plants to do as these insects sneak their way in between cells to reach the phloem sap, causing very little damage that the plant can pick up as a signal of attack. Professor Saskia Hogenhout’s research group studies sap-feeding insects including aphids, whiteflies and leafhoppers and are interested in understanding how these insects often evade their host plants own defences. Recent work has shown that the model plant Nicotiana benthamiana senses a specific peptide within the saliva of the aphid Myzus persicae. This warns the plant that aphid feeding is occurring and induces its defence response, preventing the aphids from colonising the plant.

Temperature plays an important role in the life of plants, visibly seen in how plants change across the seasons. Dropping their leaves in autumn, going dormant in winter, flowering and germinating in spring and dispersing seed in the summer – the ability of plants to sense temperature plays a key role in these processes.

Flowering time in plants is heavily influenced by temperature, a process known as vernalisation. This is where plants sense and remember prolonged cold temperatures, such as those experienced in winter, allowing the plant to know when it should start flowering.

This process is regulated by a gene known as FLOWERING LOCUS C (FLC). Research done by Professor Dame Caroline Dean’s and Professor Martin Howard’s research groups have been key in understanding the fundamentals of FLC regulation and how the plant senses and remembers the cold, preparing for flowering in spring. With the increase in average global temperatures due to climate change, the regulation of this FLC gene, and therefore flowering time, is under threat.

Professor Steven Penfield’s group study temperature and flowering in crop plants, and how this may affect crop yields and performance. Focusing on oil seed rape, their work has shown that increases in average early winter temperature is associated with a reduced crop yield. By understanding how the plants sense temperature and how this leads to a loss in yield will help to breed more resilient oil seed rape, helping to tackle the effects of climate change on these crops.

Unravelling the fundamental mechanisms of how plants sense will give us a better understanding of the interactions between plants and their surrounding environment. This can then be applied to develop strategies to mitigate the effects of climate change and help to improve global food security. Adapting our crops and agricultural systems to climate change is central to our research and forms a major part of our Healthy Plants, Healthy People, Healthy Planet (HP3) vision.