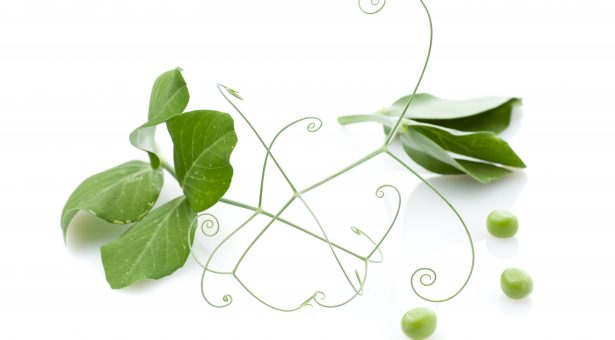 In the late 1960s, many vining pea crops were being bypassed by the harvesters because of the slow throughput of the harvesting machinery.

Throughout Europe there was a demand for crops with acceptable yields but less stalks and stems. In response to this, a research programme was initiated at the John Innes Institute in 1969, led by Brian Snoad, to investigate stalk and stem reduction and modification.

Snoad and his team began cross-breeding two known genes (capable of producing this morphological change) into cultivar pea types. The af gene replaces leaflets with branching tendrils, and the st gene (first observed in 1923 by scientists Pellew and Sverdrup at the John Innes Institute) greatly reduces the size of leaf-like appendage on leaves, called stipules.

Throughout the 1970s, breeders in Poland and the UK were in communication with each other and concentrated on producing lines with shorter stature and differing amounts of foliage.

The most extreme type, bred by Snoad and his team at the John Innes Institute, was the cultivar ‘Filby’, the first fully ‘leafless’ (afafstst) UK cultivar, released in 1978.

Field trials were conducted and although they met with initial scepticism, the studies revealed that reduced foliage also addressed other problems within the pea crop, including;

An arguably more significant yet incidental finding came out of the field trials, when it was observed that the additional tendrils led to an improvement in standing ability.

The stronger structure came about because the plants intertwined with each other to a much greater extent, producing a strong canopy architecture that was less prone to collapse. Vining and combining pea crop plants had a tendency to collapse, which resulted in a slower and less efficient harvest, as well as reduced yields.

Following this, the use of ‘leafless’ peas to improve standing ability became a major research objective.

However, it was not all plain sailing for the ‘leafless’ pea.

As time progressed, a study that analysed the effects of planting density found that ‘Filby’ had poor light interception when grown at low to medium densities. This resulted in a lower above-ground biological yield per unit area at harvest.

Fully leafless types were only found to be advantageous when grown at very high densities and the incurred additional seed cost was unattractive to farmers. Consequently, the ‘leafless’ cultivar was largely abandoned.

Scientists concluded that the ‘semi-leafless’ (afafStSt) cultivar – which has tendrils instead of leaflets but retains the larger stipules – was the most suitable of the variant lines for crop use.

The af mutation addressed the problems associated with a fully leafed pea crop, while maintaining the advantages of the reduced foliage (as outlined above).

The problem of foliage bulk running through combine harvesters has still not been fully resolved.

A novel, more intermediate af allele was found in seed donated to our germplasm collection from a Bulgarian source. This novel germplasm is currently (2016) in the hands of breeders, who are evaluating its potential for further fine tuning of the plant architecture of the pea crop.

This research proved to be revolutionary for the pea industry; the enhanced standing ability led to reduced yield losses and increased the popularity of cultivated peas as a quality food and feedstuff, with the potential of reducing our reliance upon imports for plant protein.

The development of the ‘semi-leafless’ pea illustrates how physiological analysis can benefit a breeding programme and highlights how links between researchers, breeders and growers can help address crop problems.