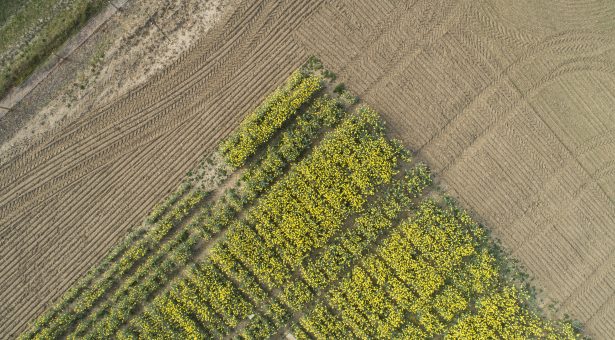 UK rapeseed growers are losing up to a quarter of their crop yield each year because of temperature rises during an early-winter weather window.

This figure emerged in new research by the John Innes Centre which identifies a critical period from late November to the Winter Solstice, December 21 or 22, where temperature has a strong link to yields.

The research, which appears in the journal Scientific Reports, reveals that a mere one-degree temperature rise in this volatile weather period costs UK rapeseed growers £16m in lost income six months down the line when the crop is harvested.

Based on analysis of climate and yield data, the team calculate that temperature variation during this critical time window can lead to losses of up to £160 million in the UK rapeseed harvest – about 25% of the total value.

Oilseed Rape, in common with many other winter crops, requires a prolonged period of chilling, known as vernalization, for the plants to flower and set seed. The effect of climate fluctuations on this process is the focus of considerable interest among researchers and breeders looking to safeguard and stabilise yields.

Professor Steven Penfield a lead author on the paper says: “Wide variations in oilseed rape yield is a major problem for farmers so we looked at links to temperature to see whether rising temperatures could have an impact on yields. We had observed there was an effect; what is surprising is the magnitude of the effect we found.”

“The study shows that chilling of the crop in winter is really important for the development of a high yield. But it’s not just winter in general, it’s a specific time from late November and through December. Our data showed that even if its colder in January and February, it doesn’t have the same effect on yield.”

The team analysed data stretching back 25 years from DEFRA and Agriculture and Horticulture Development Board (AHDB) trials to model how temperatures were affecting productivity.

“If you ask farmers why they don’t grow more rapeseed, they usually say it’s too unreliable,” says Professor Penfield. “The data in our study clearly shows temperature is having a direct effect on UK agriculture productivity.”

In the UK there have been improvements in Oilseed Rape yields in recent years. But this has not been accompanied by increases in yield stability with year on year variation accounting for up to 30% of crop value. Until now the drivers of this instability have been unclear.

Climatically winter weather in the UK is subject to temperature volatility due to a phenomenon known as the North Atlantic Oscillation. Through fluctuations of atmospheric pressure this can bring warmer, wetter westerly winds or chilly easterlies which bring colder, drier weather to the UK.

In the study the researchers ranked oilseed rape varieties according to the stability of their annual yield. Further genetic analysis showed that the trait of yield stability is not correlated with that of yield.

“This means it should be possible to breed for yield stability and high yields together without having to sacrifice one for the other,” says Professor Penfield.

The study, in establishing a clear link between temperature and productivity raises the hope that future rapeseed crops can be bred so that they are less temperature-sensitive, offering breeders the prospect of more stable and productive yields.