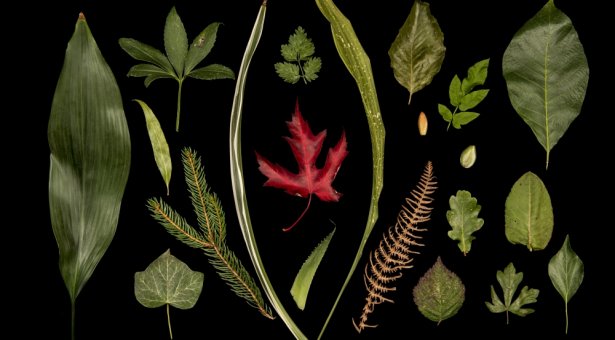 Leaves exhibit a wide range of shapes and forms, from the flat, long leaves we see in grasses, to the broader oval, toothed or dissected leaves we see in many of our flowering plants such as in the daisy or brassica family. Leaf primordia can also develop into specialised structures such as the cup-shaped traps of the carnivorous bladderworts.

Understanding how this diversity comes about, through variation in genetics, cell growth and division is still an exciting problem for developmental biologist and a key question for the Coen group at the John Innes Centre who work with collaborators around the world to try to understand how this diversity is controlled.

The group uses state of the art technologies to help unpick the processes underpinning leaf development and have made some fascinating discoveries which help us to make sense of the variety of leaf shapes that we see around us.

Imaging techniques at a microscopic level reveal patterns of growth and cell division at very early stages of leaf formation. Time-lapse photography and the use of fluorescent proteins allow visualisation of developmental processes. Used with computational modelling techniques the group have been able to test hypotheses for developmental control which can then go on to be tested experimentally in the lab using developmental genetics.

The group have used these techniques to develop a dual control model to explain, for the first time, how the two processes tissue growth and cell division are integrated to control leaf shape through physical changes to the cell size, cell number and organ size.

Understanding how the anatomy of the sheathing leaf of grass plants equates to that of a group of broad-leaved plants, called the eudicots has been an unsolved problem for many years and something that the Coen lab have been working on.

Prof Enrico Coen explains, “The grass leaf has been a conundrum. By formulating and testing different models for its evolution and development we’ve shown that current theories are likely incorrect, and that a discarded idea proposed the 19th century is much nearer the mark.”

The group looked at gene expression patterns in the developing leaves and compared this between the narrow grass leaves and broader eudicot leaves. They modelled different hypotheses for how grass leaves grow and tested the predictions of each model against experimental results to find that a model from the 19th century, which was later discarded by 20th century morphologists, best fitted the data that they observed. The sheath of the grass leaf was equivalent to the petiole or stalk of the eudicot leaf. This study showed how simple changes of growth rules based on a common pattern of gene activity was able to generate a remarkable diversity of leaf shapes.

For more complex shapes like the cup-shaped trap of bladderwort, Utricularia gibba, imaging and gene expression studies were used again to find that polarity fields running across the leaf are used to orientate growth. Simple changes to gene expression in different areas of the developing leaf, with flexibility in the growth rate meant that the area of the leaf which would normally give rise to the upper surface was restricted and formed the inner layer of the trap. This model was able to explain the range of leaf shapes that we see in nature.

This programme of research forms part of the Genes in the Environment Institute Strategic Programme at the John Innes Centre, aiming to understand the development of plant organs and plant architecture, information which can be used by plant and crop scientists to better understand the processes controlling plant development, an important factor in developing improved crops.