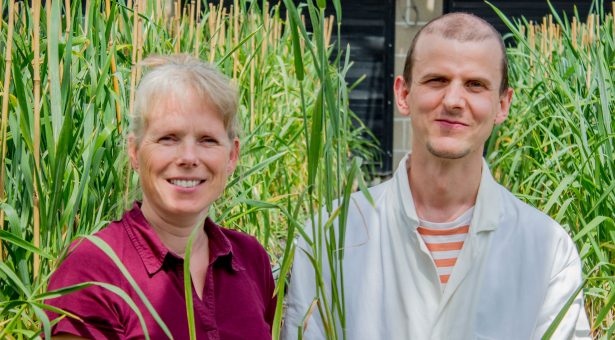 Scientists at the John Innes Centre have developed a variety of wheat that contains high levels of iron.

White flour made from the engineered wheat contains twice the typical amount of iron, something that cannot be achieved by normal breeding.

The amounts of iron are significantly higher than commercially grown varieties of wheat, and could alleviate problems of iron deficiency in people around the world.

Dr James Connorton, working with Dr Janneke Balk and Dr Cristobal Uauy, used the recently published wheat genome to locate two genes that were responsible for transport of iron. They then used one of these genes to direct more iron into the endosperm, the part of the grain from which white flour is milled.

Dr Balk commented on the impact of this research; “This breakthrough means that higher levels of iron from the wheat itself could replace added iron in everyday items such as white flour and breakfast cereals, helping the estimated 1 billion people that suffer from iron deficiency worldwide.”

Biofortification is the process by which the nutritional quality of the edible parts of the plant is improved by enhancing the levels of a desired vitamin or mineral, in this case iron. For diets that are low in meat, seeds such as wheat and rice are a major source of this essential nutrient.

Naturally occurring in wheat, iron is largely found in the outer parts of the grain, the aleurone layer and the seed coat. Unfortunately, these parts of the grain are removed during production of white flour, resulting in low levels of iron in the final product.

The endosperm is the inner starchy part of the grain used to make flour. It has very little iron naturally, so white flour made from commercial wheat varieties also contains low levels of iron. With the help of the BRACT Crop Transformation platform the team engineered the wheat so that the endosperm accumulated more iron.

By understanding the mechanisms of iron uptake into the endosperm of the plant, breeders can look at ways of incorporating this knowledge into wheat breeding programmes and work to produce wheat that gives white flour with enhanced iron content.

Iron uptake and transport within plants is highly regulated because, even though iron is essential for plant growth, it is toxic for the plant at high concentrations. Biofortification of the cereal grain therefore requires that the plant accumulates higher concentrations of iron in the relevant tissues without any negative impacts, particularly upon yield or plant health. Plants in this study showed little difference in plant growth and grain yield.

Flours produced from modern wheat varieties contain low levels of iron and in many countries, including the UK, there is a legal requirement to increase the iron content of wheat. Currently this is done by adding iron-containing chemicals to improve the iron concentration and help to reduce iron deficiency.

Read the paper ‘Wheat Vacuolar Iron Transporter TaVIT2 Transports Fe and Mn and Is Effective for Biofortification‘ in Plant Physiology.