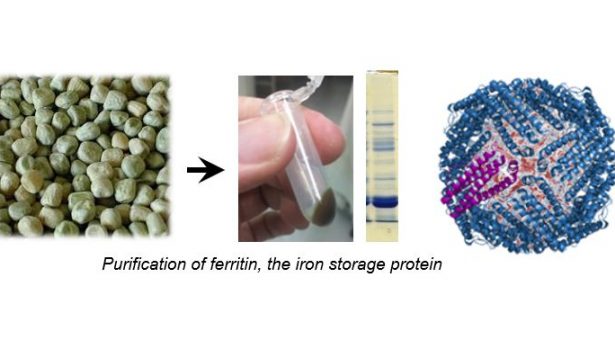 Leafy vegetables, pulses, grains and potatoes are rich in iron, but this is not always bioavailable for human nutrition.

Plants do not produce much haem, therefore iron in plants is classified as ‘non-haem’ by nutritionists. For a plant biochemist working on iron cofactors this seems a rather crude classification.

The forms of iron found in plants include Fe-S cluster proteins in leafy vegetables, complexes of iron and organic molecules, and the iron storage protein ferritin. These non-haem iron species tend to fall apart in the digestive tract and the iron is taken up as Fe2+ in the gut.

Unfortunately, plants contain high levels of anti-nutrients, such as polyphenols in tea and phytic acid in grains, which severely inhibit iron uptake.

As part of a collaborative project funded by a grant from the BBSRC DRINC2 programme, the Balk group have shown that iron from plant ferritin can be taken up by different pathways in the intestine (Perfecto et al., J. Nutr, 2018); and that frozen garden peas are a better source of bioavailable iron than mature peas (Moore et al., 2018).

Wholegrain wheat has plenty of iron and zinc (~30 µg/g each), but the minerals are concentrated in the bran which is also rich in phytic acid. This phosphorus storage form acts as a strong chelator of minerals in the human intestine, thus limiting absorption of iron and zinc.

White flour, which is produced from the starchy endosperm of the grain, has little phytic acid, but is low in minerals. The iron concentration of white wheat flour is ~6 µg/g, which is insufficient if bread or other wheat products such as pasta were the main daily staple.

The Balk lab has managed to significantly increase the iron concentration of white flour by redistributing iron to the starchy endosperm (Connorton et al., 2017). We changed the expression pattern of a wheat gene encoding a vacuolar iron transporter, such that it switched on in the endosperm of the developing grains where it is not normally expressed.

A new grant (BB/P019072/1) will enable studies into the underlying molecular mechanisms as well as other biofortification strategies. We are also conducting a field trial of the high-iron wheat.

How do you make high iron wheat?

Our genetic strategy increased the total iron concentration in white flour to 20 µg/g, well above the legally required fortification of 16.5 µg/g in the UK. Preliminary studies have shown that the iron tends to be more bioavailable, which is correlated with low phytate levels in the endosperm (Connorton et al., 2017).