In contrast to the well-studied iron sensing-signalling mechanisms in bacteria, yeast and mammals, comparatively little is known in plants.

Several basic Helix-Loop-Helix (bHLH) transcription factors involved in the iron deficiency response have been known for some time, but how their transcriptional activity is altered in response to the iron status of the plant has remained elusive. Among other factors, a small gene family of E3 ubiquitin ligases with conspicuous Fe-binding motifs have recently emerged as key players in plant iron homeostasis, with a possible iron-sensing function.

The subfamily of hemerythrin E3 ligases are conserved from green algae to higher plants, and bear distant homology to FBXL5, a regulator of iron homeostasis in mammals. Phylogenetic analysis showed two separate clades in higher plants: the BRUTUS (BTS) and BRUTUS-Like (BTSL) proteins. The rice HRZ proteins belong to the BTS clade. See the mini-review by Rodriguez-Celma et al. (2019) for more details.

Our recent in-depth functional analysis of the two BTSL genes in Arabidopsis (Rodriguez-Celma et al. 2019 PNAS), showed that they are partially redundant, with BTSL2 being more of a key player than BTSL1.

Common features of the BTSL and BTS genes are that their expression is induced under iron deficiency, and disruption of the genes leads to iron accumulation.

The BTSL and BTS ubiquitin ligases also seem to differ in their target proteins: BTS facilitates the degradation of the iron-regulated transcription factors bHLH105/ILR3 and bHLH115 (Selote et al. 2015, Physiol. 167, 273-86), whereas BTSL2 targets FIT (bHLH29) for degradation, a central regulator of iron uptake genes in the roots.

Constant turnover of FIT was already suggested to be important for a rapid shutdown of the iron deficiency response when iron becomes available again (Sivitz et al. 2011, Plant J. 66, 1044–52). Indeed, we showed this in the btsl1 btsl2 double mutant, which cannot down-regulate iron uptake in a timely manner and accumulates toxic amounts of iron (Rodriguez-Celma et al 2019 PNAS).

How iron binding to the N-terminal hemerytrhin domains of BTS/L proteins affects the E3 ligase activity of the C-terminal domain is still an open question. This is the topic of ongoing research.

Figure: Proposed working model for the regulation of iron uptake by BTSL2 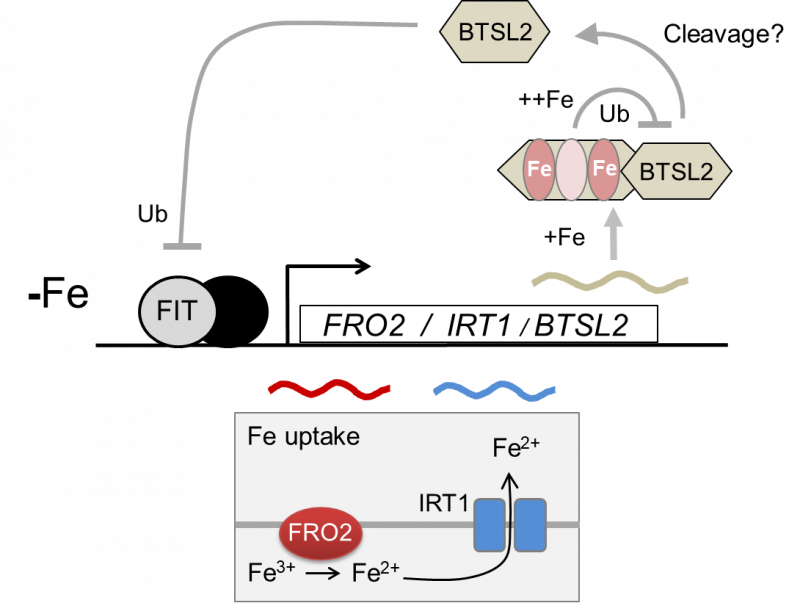