The ISC and SUF pathways are similar to those found in bacteria, although there are interesting differences in the green lineage (Balk & Pilon, 2011; Balk & Schaedler 2014). Each pathway consists of 10+ proteins, including a cysteine desulfurase that generates persulfide, and scaffold proteins.

The assembly of FeS clusters in the cytosol and nucleus is dependent on the mitochondria. This was first shown in yeast by Lill and coworkers, and the Balk lab confirmed that Arabidopsis NFS1, the mitochondrial cysteine desulfurase, is also required for extra-mitochondrial FeS enzymes (Bernard et al., 2013).

Based on in-vitro studies they propose that the persulfide formed by NFS1 is exported to the cytosol in the form of glutathione trisulfide by the ATP-Binding Cassette transporter ATM3 in plants and Atm1 in yeast (Schaedler et al., 2014).

The cytosolic FeS assembly pathway (CIA) consists of 8 proteins of which 7 are conserved in plants. All except MET18 are essential for embryo development in Arabidopsis (Bych et al., 2008a; Bernard et al., 2013; Luo et al., 2012). Viable mutants in NBP35 have serious developmental defects (Bastow et al., 2017). The CIA proteins are functionally associated with DNA polymerases and DNA integrity, but their precise molecular functions in eukaryotes remain unknown. 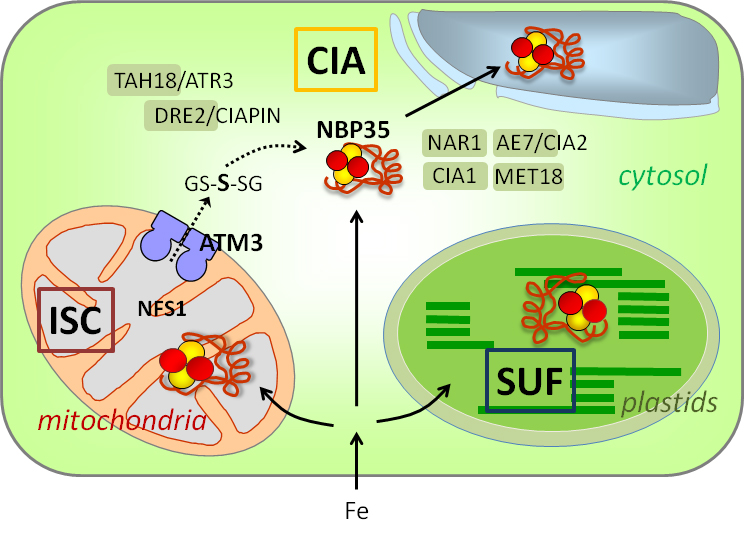