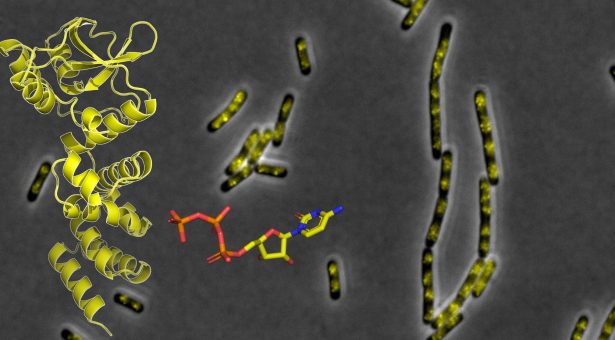 To grow and multiply efficiently, bacteria must coordinate cell division with chromosome segregation.

Crucial to this process in the bacterium Bacillus subtilis (commonly found in soil and the guts of humans and ruminants) is a protein called Nucleoid Occlusion Factor or ‘Noc’.

Noc binds to particular binding sites on the chromosome and then recruits further Noc proteins to grow a larger protein complex.

Part of the Noc protein can also bind to the cell membrane, pulling chromosomal DNA towards the membrane, allowing space for cellular division machinery to split the cell in two while keeping the DNA away and undamaged from this process.

Previously it had been unclear how the physical link between chromosomal DNA, Noc protein, and the cell membranes is established and regulated. To solve this mystery, researchers in the group of Dr Tung Le and in the scientific platforms at the John Innes Centre teamed up with Professor Jeff Errington and Dr Ling Wu at the Newcastle University.

The team showed that a small and abundant molecule called Cytidine Triphosphate (CTP) is key to the functions of Noc. CTP binding enables Noc to “spread” on DNA to form a large protein complex. CTP also “switches on” the membrane-binding ability of Noc. Mutants of Noc that are defective in CTP binding can no longer pull DNA towards the cell membrane.

The research suggests that these previously rarely identified CTP switches may be far more widespread than previously thought – and might open a pathway towards the development of drugs to target bacterial chromosome segregation or cell division.

“Previous research has shown that new practical applications and innovations stem from fundamental discoveries. Understanding the mechanisms underpinning CTP binding and hydrolysis and how CTP switches evolve will open many new and unexpected avenues for research and application,” said Adam Jalal, the first author of this study.