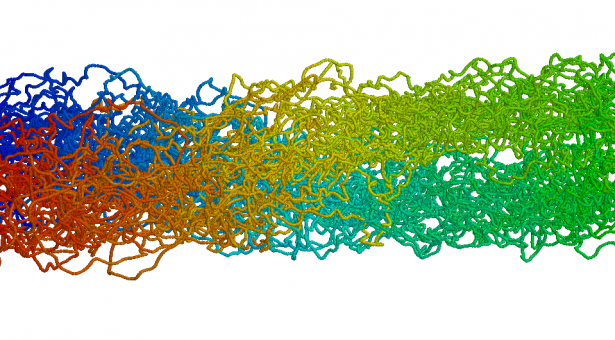 An unassuming crescent moon shaped bacterium offers insight into how DNA is organised inside cells.

Within most cells there are several million base pairs of DNA, all packed into a tiny space. In organisms such as humans, DNA is organised into structures called chromosomes inside a nucleus, a membrane-bound compartment within each cell. Bacteria lack a nucleus, and how bacterial DNA is organised has puzzled biologists for many years.

Understanding the spatial arrangement of DNA in bacterial cells and the significance of this for processing and maintaining the information it encodes is the focus of Dr Tung Le’s research.

Hi-C quantifies the number of interactions between DNA segments that are nearby in three-dimensional space but may be hundreds of thousands of base pairs apart on a linear genome. Using this information, scientists can piece together the positions of thousands of DNA segments to produce a three-dimensional (3D) map of the chromosomes of any organism.

Dr Le’s research focuses on studying the organisation of DNA in a bacterium called Caulobacter crescentus. As its name suggests, it is shaped like a crescent moon. This curious micro-organism is widely found in freshwater lakes and streams and it is a particularly useful model organism for Dr Le’s research.

Firstly, Caulobacter crescentus is a well-established model for research where cell biology, deep sequencing and genetic tools are well developed and optimised. Secondly, its chromosome is relative simple compared to other organisms.

Dr Le explains why this is so useful: “The problem of solving the chromosome structure is already very hard. So, we try to understand the fundamentals of chromosome organisation in a simple bacterium first.”

By applying Hi-C to Caulobacter, Dr Le showed that the 3D structure of its DNA is highly organised, and its chromosome is divided to multiple separated territories. Interestingly, the chromosome of Caulobacter is elongated in shape and slightly twisted on itself.

Another peculiar feature of Caulobacter crescentus is that after this bacterium divides, the two daughter cells look very different – one has a swimming tail, called a flagellum, while the other has a ‘stalk’ in place of the flagellum that allows it to adhere to the bottom surface of the lake.

These differences facilitate the tracking of cells and mutants that have defects in their DNA organisation. By studying Caulobacter mutants, Dr Le and his team can learn more about how proteins maintain the complex 3D shapes of DNA.

Recently, Dr Le’s team have found that a protein complex called the Structural Maintenance of Chromosomes (SMC) is crucial in controlling the elongated chromosome structures in Caulobacter crescentus. Shaped like a ring, this large protein handcuffs DNA together to structure the chromosome inside the cells. SMC is found not only in the curiously shaped Caulobacter crescentus but also in most organisms – including humans.

“The conservation of SMC shows that chromosome organisation is very important, not only in simple bacteria but in all domains of life,” Dr Le explains.

Next, Dr Le hopes to explore the mechanisms responsible for maintaining DNA integrity in Caulobacter, and perhaps take a closer look at DNA-damage repair.

“Unrepaired DNA damage can lead to the loss of genetic information and eventually cell death,” explains Dr Le. “How the chromosome is organised might facilitate damage repair; I am sure there are interesting mechanisms that are yet to be discovered there.”

The image at the top of this page is a 3D map of the chromosome in Caulobacter crescentus. Image courtesy of Dr. M. Imakaev.