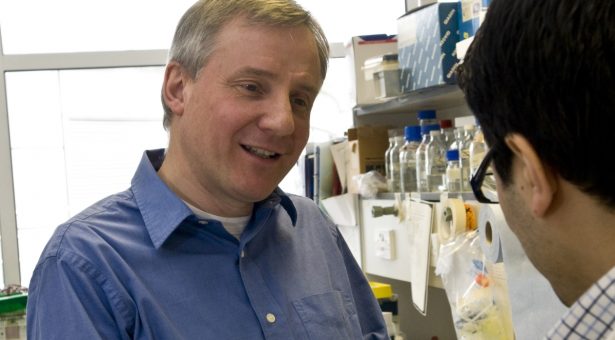 After more than a decade at the John Innes Centre, first as a postdoctoral researcher and then on a five-year fellowship as an independent group leader, Professor Buttner received the news that he had been granted tenure and was here to stay. That was 1996.

23 years on he reflects on that moment, “Getting a permanent job here was bliss. I was so grateful for the opportunity, and so delighted that Alison and I could just get on with our careers and our lives.” Alison is Professor Buttner’s wife, another leading John Innes Centre scientist, Professor Alison Smith FRS.

“I knew within weeks of coming to the John Innes Centre that I was never going to leave if I could possibly help it. It was obvious that this place was special,” he says. “I loved the way the walls between labs were so low – if you wanted to go somewhere else on site because they knew a certain method, then that sort of thing just happened – and it was such a stimulating, enthusiastic place.”

It was because Professor Buttner started out as a five-year fellow himself that he was asked to become the leader of the JIC’s Independent Fellows scheme, which actively recruits talented early career scientists with ambitions to be a Group Leader into a programme with a clear career structure. Researchers are recruited via a competitive process each year and supported in seeking five-year scholarships. Once they have secured fellowships – from the Royal Society or BBSRC for example – they can set up their own labs. Subject to a transition review after two-and-a-half years, they are placed on tenure track and at the end of five years are assessed for tenure.

“When we set it up, one thing I campaigned for is that we offer a career path and a direct route to tenure. Otherwise you have the exploitative situation which happens in some academic institutions where you have five years and then you’re out the door,” he says.

Professor Buttner is now the head of the Molecular Microbiology department and his research investigates the complex life cycle of the soil bacteria Streptomyces. These organisms are recognised as globally important microbes, producers of most of the world’s most clinically useful antibiotics.

His focus is the control of sporulation in bacteria and the Buttner lab has made important discoveries about how a small nucleotidesignalling molecule called cyclic di-GMP controls progression through the pathway from vegetative growth to spore dispersal.

Professor Buttner’s lab has also pioneered the use of Streptomyces venezuelae as a new model system for the genus. Unlike most Streptomyces species, S. venezuelae sporulates in liquid culture, which provides numerous advantages, including the opportunity to make movies of the complete spore-to-spore life cycle and watch the movement of developmental proteins in time and space.

His work, and that of new Group Leader Dr Susan Schlimpert, focuses on the fundamental biology of Streptomyces, which synergises strongly with the work of fellow John Innes Centre researchers Professor Barrie Wilkinson and Dr Andrew Truman, who uncover pathways to pharmaceutically useful products made by these bacteria. When people ponder the essence of the John Innes Centre approach, some think there is a rivalry between curiosity-driven research and work applied to commercial outcomes, but Professor Buttner sees these as two sides of the same coin.

“To me it’s obvious that the John Innes Centre needs both fundamental and applied work and it would be a much weaker place if we did only one or the other,” says Professor Buttner, who is very optimistic about the future. “There has never been a better time to be a microbiologist,” he says, and he believes the future of the John Innes Centre microbiology is in good hands – partly because of recruitment of five-year fellows such as Dr Andy Truman, Dr Susan Schlimpert and Dr Tung Le.