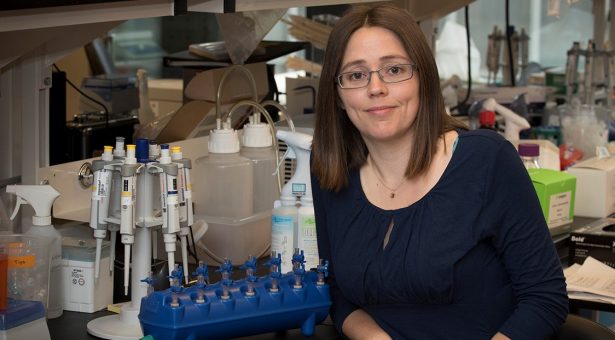 We caught up with Lucy Foulston, the Program Director at Ginkgo Bioworks, who did a Rotation PhD at the John Innes Centre.

When were you at the John Innes Centre and what were you doing while you were here?

I started my PhD at the John Innes Centre in September 2006. I joined the four-year Rotation PhD programme and undertook my first-year projects in the Molecular Microbiology, Biological Chemistry and Cell and Developmental Biology departments.

The core theme through my projects was my interest in microbial genetics and I ultimately chose Professor Mervyn Bibb’s lab to complete my PhD. My thesis work focused on interrogating the biosynthesis of an antibiotic by a rare actinomycete species.

What have you gone on to do since leaving?

After my PhD, I continued in microbial genetics research as a postdoc, embarking on a trip ‘across the pond’ to work with Professor Richard Losick at Harvard University, Cambridge, Massachusetts. At Harvard I had the opportunity to learn about Bacillus subtilis genetics, for which this lab is known, and to introduce a new organism to the lab, Staphylococcus aureus. My work focused on understanding the basis of biofilm formation in this key human pathogen. Towards the end of my postdoc, my adviser introduced me to a small biotech company in the area that was focused on work very similar to that of my PhD.

In 2014, I joined the Microbiology group of Warp Drive Bio, where I was involved in mining the genomes of bacteria for novel natural products including antibiotics. Earlier this year, I joined Ginkgo Bioworks, where we learn from nature to develop new organisms that replace technology with biology.

What intrigued you about microbial genetics?

From an early age, I became interested in medicine and human disease; I was in fact a little obsessed with reading about different historical plagues and books about emerging diseases such as The Hot Zone. I developed a real respect for these microbes and viruses, which could incapacitate organisms vastly larger than themselves, and I was intrigued by the mechanisms for how they were able to do so. During my undergraduate degree in Biochemistry at Oxford University, I really started to understand the sheer breadth of what microbes could do. I was fascinated with the range of environments and substrates that microbes could survive in and the biochemical pathways that were involved in doing so.

When I started my PhD at the John Innes Centre, I heard about Streptomyces for the first time – like most people I initially assumed (from the name) that this was some kind of fungus but came to learn about these incredible bacteria, their complex life cycle, the fact that they are multicellular, and their propensity to make so many useful products, and was hooked on trying to understand how they accomplish these incredible feats.

How was the move from academia to industry?

The transition was a steep learning curve, for sure. In academia, for example, I could just write to other labs and ask to use their plasmids and strains. Once I started in industry, I realised I had really taken that luxury for granted. It had also been easier to attend conferences, to collaborate with other labs and to talk freely about my research. On the other hand, I discovered how much more funding is available for industry research; for example, the lab I joined was brand new and kitted out with the latest equipment. I also learnt that rather than working away at my own independent project, as I had in academia, I would be working as part of a team, all collaborating to reach a set of common goals.

Finally, what do you think the future holds, both for yourself and microbial research?

Synthetic biology and genetic modification have the potential to provide benefits to all aspects of human life: in medicine, food and agriculture, and the environment. Microbes provide a fantastic chassis for this work. Genetic manipulation is rapid and can be done on a massive scale. The complex and varied lifestyles of microbes provide a wealth of genetic starting points on which we can draw.

Finally, production of microbial products can be readily scaled to commercially viable processes. I am excited to be contributing to the goal of Ginkgo Bioworks to make biology easier to engineer and to allow us to access the amazing potential that microorganisms offer.