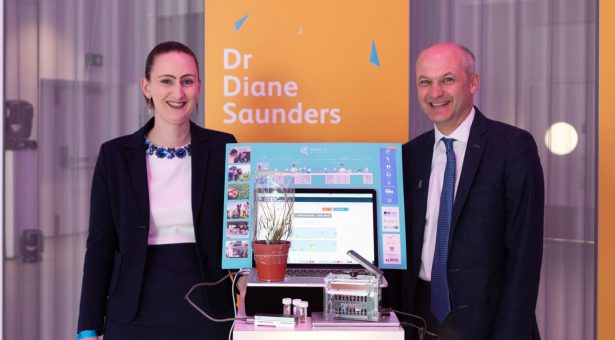 Scientists at the John Innes Centre who have been recognised for their contributions to the research community, both nationally and internationally since our last issue.

Professor Bevan has been appointed as an Officer of the Order of the British Empire (OBE) for his world-leading services to plant genetics and genomics. Director Professor
Dale Sanders FRS said, “I am delighted that Mike’s exceptional and sustained contributions to plant sciences over many years have been recognised. The technologies and biological insights that he has developed have provided invaluable resource for the global plant science research community and for wider societal benefit through his work on the wheat genome.

BBSRC Innovator of the Year for international impact

Dr Diane Saunders has been awarded the BBSRC Innovator of the Year for international impact for work on establishing plant disease diagnostics. In collaboration with partners in Ethiopia and Mexico, the advance known as MARPLE (Mobile and Real-time Plant disease) Diagnostics allows wheat rust strain identification within two days.

Fellow of the Royal Society

Professor Anne Osbourn has been elected as a Fellow of the Royal Society. The honour reflects her distinguished contribution to microbial and plant biology through pioneering work on plant pathogens and the role of gene clusters in natural product biosynthesis. Professor Osbourn becomes the 30th Fellow of the Royal Society (FRS) in the 109-year history of the John Innes Centre.

BBSRC Innovator of the Year Finalists

A collaborative team of scientists from across the Norwich Research Park, including John Innes Centre’s Ricardo Ramírez González and Sreya Ghosh, made it to the final of the BBSRC Innovator of the Year in the Early Career researcher category. Their open-source project, a partnership with Oscar González-Navarro from the Quadram Institute, Luis Yanes from the Earlham Institute and Marcela Mendoza-Suárez from the University of Oxford, developed a growth chamber that made speed breeding more cost effective and accessible to the research community.

Dr Arora received the award for her pioneering work on the AgRenSeq method, which allows disease-resistance genes to be rapidly cloned from wild relatives. Providing professional development opportunities for women working in wheat, Dr Arora joins an exclusive group of 50 international award winners since 2010.