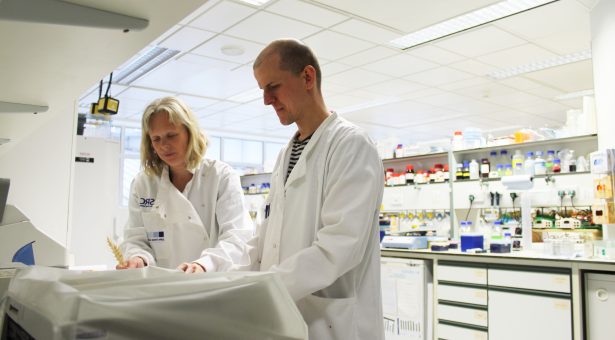 Wheat that has been biofortified to produce white flour with increased iron has progressed successfully through the first season of field trials.

Tests on the newly developed variety grown for the first time in the field showed that the grain contained double the amount of iron in the white flour fraction of the grain.

The aim of the research by scientists at the John Innes Centre is to address iron deficiency anaemia, a significant global health problem with women and girls particularly affected.

The wheat plants in these trials contain two extra sequences of DNA, also from wheat, that cause an accumulation of iron.

The DNA rearrangement was made by genetic modification, shown to be successful in significantly increasing the grain iron content in greenhouse-grown plants. In April DEFRA awarded the John Innes Centre a licence to grow the GM wheat in a small-scale field trial.

Analysis of the grain showed a two-fold iron increase in hand-milled white flour compared to control wheat. This is similar to the increase seen in indoor-grown wheat.

A new observation is that the high-iron grains from the field trial are slightly smaller than the control, showing a 10% decrease in weight. But there are more grains per spike so that the total weight of grain per spike is similar.

Dr Janneke Balk from the John Innes Centre, one of the researchers leading the project says: “We are pleased with progress so far which demonstrates that the method is working in the field. In field trials plants are exposed to different weather conditions which is very different from climate-controlled growth rooms.

“Despite drought conditions this spring, the high-iron wheat variety grew as well as the control wheat, and was harvested in early August.”

The field trial will be repeated in 2020 and 2021, in line with common scientific practice.

The trials are conducted over three growing seasons because of differences in weather patterns from year to year. Once completed, all data will be published.

Further research will assess how the iron is taken up in the body using cell cultures of intestinal cells, in the laboratory of Professor Paul A Sharp, King’s College London.

Results using flour from indoor-grown grain have already shown that the cells are able to absorb more iron from the high-iron variety than from control wheat. Researchers will test if the iron in field-grown wheat is also more absorbed by the body.

Professor Cristobal Uauy from the John Innes Centre says: “The research aims to address the persistent problem of iron deficiency, a nutritional deficiency that particularly affects girls and women in the UK and other parts of the world. This problem is currently addressed by adding iron powder to flour and breakfast cereals, which could be replaced by using our high-iron wheat for these food products.

“Wholemeal flour which uses the bran and wheat germ portions of the wheat seed produces more iron but it is not all absorbed into the body. By producing high-iron white flour we can have the biggest impact on health.”

This research in the laboratories of Dr Balk and Professor Uauy is publicly funded. The high-iron wheat that emerges from these trials will be made available for breeding into elite wheat varieties for countries that allow GM crops. Farmers will be able to keep seeds for planting the next year, if they wish to do so.