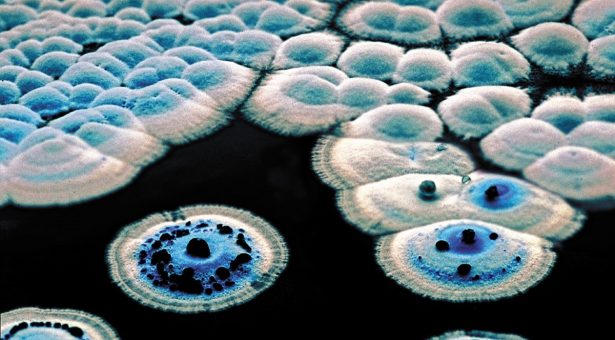 Streptomyces are soil-dwelling bacteria that produce approximately two-thirds of the antibiotics in current clinical use.

The production of these antibiotics – used by the bacteria to fend off rivals – is coordinated as part of a complex life-cycle that ends in the formation of spores.

In the reproductive process of sporulation, bacteria enter a state of dormancy enhancing their survival in adverse conditions.

If researchers can understand how such a reproductive life-cycle is controlled, they may be able to exploit the production of clinically-useful antibiotics.

In a study published today in the American Society for Microbiology journal, mBio, researchers from the John Innes Centre reveal that a key protein acts as a “brake” to ensure the correct timing of sporulation in Streptomyces. This protein is a DNA-binding protein called BldC.

The team showed that when they removed the brake by removing the gene that encodes for the protein, sporulation occurs too early.

To understand how this BldC brake works, the team used a method called Chromatin-Immunoprecipitation-sequencing (ChIP-seq).

This technique allows researchers to use a specific antibody to identify where the BldC protein binds on the chromosome of Streptomyces. Another technique, called RNA-sequencing (RNA-seq) enabled them to see which genes are switched on or off by the BldC protein.

“This approach showed that the BldC brake works by keeping important genes required for sporulation switched off at a time when Streptomyces wants to grow non-reproductively,” explains first author Dr Matt Bush.

“To our surprise, these studies showed that as well as switching some genes off, BldC can also switch other genes on. Because BldC binds at many positions on the chromosome, one possibility is that it also serves to organise the chromosome’s structure – it’s a nucleoid-associated protein).”

One question that remains to be answered in future studies is: how is the BldC-“brake” removed?

The study used the model organism, Streptomyces venezuelae (“Sven”). The main advantage of S. venezuelae is that unlike other model species, it sporulates in liquid as well as on solid agar-plates.

“This means we can use time-lapse fluorescence microscopy to make movies of Streptomyces undergoing the entire spore-to-spore life-cycle in real-time. We can put a fluorescent “tag” on a protein in the cell to see where it goes and when. Here we put a tag on the “FtsZ” protein that is required for the cell division event that produces spores.” says Dr Bush.

The paper ‘BldC Delays Entry into Development To Produce a Sustained Period of Vegetative Growth in Streptomyces venezuelae‘ appears in the American Society for Microbiology.