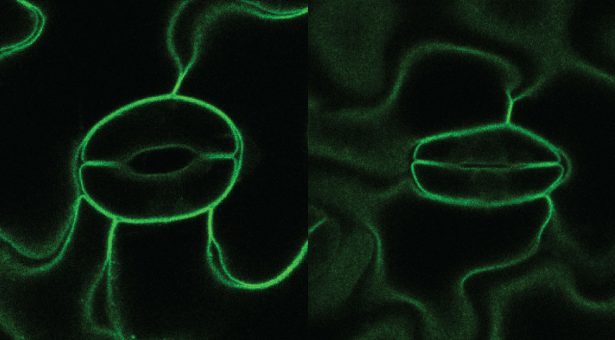 Whether or not you like your sprouts, plants will likely form a major component of your diet: cereals, bread, potatoes, pasta, rice, chips, etc. all come from plants.

Rice, maize and wheat alone make up 60% of the world’s food intake.

Not only are plants essential for food security, they make most of your clothes, such as cotton and linen products.

So, plants play an indispensable role in our lives. More than that, without photosynthesis we wouldn’t even have oxygen to breathe.

Plants and algae perform photosynthesis, which converts atmospheric carbon dioxide and water to sugar using the energy from the sun. This process produces oxygen as a by-product and this by-product of green life is thought to have given rise to the current atmospheric oxygen levels of around 20%. Simplified, we breathe in oxygen and carbon dioxide out, and plants do the opposite.

We breathe in and out through our mouths but how do plants breathe?

Plants also have mouths. The green parts of land plants are covered with tiny units called stomata, which is Greek for mouths.

Stomata are formed by two cells, called guard cells, each a mirror image of the other, which together form a ring shape like a doughnut (those with a hole).

Unlike doughnuts, stomata are exquisitely regulated and dynamic.

We wanted to understand how this opening and closing works.

Plant cells are surrounded by a cell wall to provide mechanical support. We know that when signals trigger stomata to open the internal pressure of the guard cells increases and the guard cells bow out, a bit like pumping up a bike’s inner tube only that the pressure in stomata can reach 50 atmospheres (equivalent to the hydrostatic pressure of 500 m of water).

But how exactly does this work? How important is the shape of the guard cells? How must the material be formed to withstand such high pressures and yet rapidly open and close?

We recently explored these questions using a combination of mathematical modelling and biophysical experiments.

Developing a mathematical model of a process helps understand the important factors that contribute to the overall behaviour of the system. The model requires several key ingredients: pressure, the shape of the guard cells, and the mechanical properties of the cell walls.

We built a computational 3D mechanical model to explore the above questions.

Although the underlying computation is not trivial, the basic idea is simple: choose a shape for the guard cells, choose some material properties (elasticity, stiffness in different directions), then increase the pressure and see what happens. If the stomata don’t open, change the shape and/or the material properties and try again. Using this approach we first tried simple elastic materials and found that the stomata would not open. Clearly, the model was missing a key ingredient.

The cell wall is a complex material and it is composed of fibres that are cross-linked and embedded in a gel made of sugars.

These fibres are much stronger than the rest of the cell wall. The fibres therefore give rise to what is known as anisotropic behaviour, meaning the cell wall strength is dependent on direction. When this ingredient is added to the model, stomata open as pressure increases.

There was, however, a problem, even though the model opened, the dynamics of opening did not match experimental data. That meant we still were not correctly capturing the behaviour and therefore missing an important aspect of the underlying mechanics.

Certain materials are known to exhibit a phenomenon called strain-stiffening where it becomes increasingly difficult to stretch the substance as it is stretched. Could this be the missing ingredient?

These insights can be exploited for improving how plants respond to climate change and in particular to guide research that aims to improve heat and drought tolerance of crops, thereby contributing to food security.