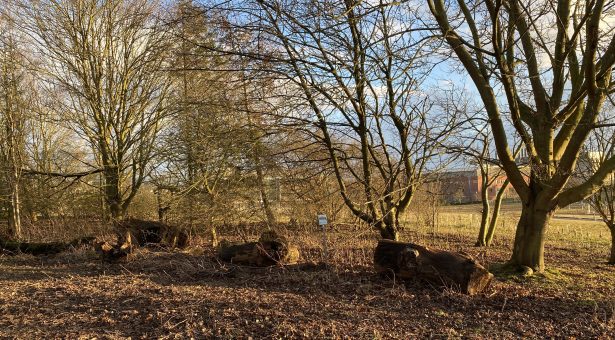 It’s amazing what natural wonders you can find just a short stride from your doorstep or workplace.

One such place at Norwich Research Park is a semi-wild bio-diverse space of wildflowers, birdsong, and home to at least one extremely rare species of moth.

The wild woodland lies on the edge of the Park, at the north-west boundary adjacent to the Watton Road. Close by is the former Hillhouse Farm, one of the highest points and the oldest building on the site.

This wild place will, in the coming months and years, take shape with seating and signage thanks to the efforts of a new working group of which Research Assistant, Dr Anne Edwards is a founding member.

You could work here for years and never venture to this area to look within.

The plan is to create some pathways for people to take a stroll, and to provide a seating area for those who want to dwell longer. The seats form a kind of NRP “henge” made up of the trunks of trees which were removed to make way for the Chatt building in the 1990s.

Another feature is the collection of blue beehives. Anne says: “I helped to collect them in April 2020 at the height of the first lockdown. Beekeeping was a reserved occupation, so I wasn’t breaking any rules.

It was the dead of night so the bees were sleeping rather than flying around the car and I must say my car has never smelled so nice as it did that night on the journey back from Yarmouth.”

Blue beehives and a henge may serve as the physical focal points, but the aim, says Anne, is to let it “remain wild, so visitors will be able to appreciate some of the rarest and most beautiful sights – just a short walk from their places of work.”

At least one study has suggested that a renewed interest in nature is a welcome side effect of Covid-19. It found that 26 per cent of people visiting parks during the early stages of the pandemic had rarely or never visited parks the previous year.

Anne reflects: “The effects of nature on wellbeing, particularly during the lockdowns, were enormous.  Before, we often relied too much on needing to go somewhere to do something, when really it is all on your doorstep all the time. If you know how to enjoy nature you don’t need to go to the cinema or go shopping for your entertainment.”

Over the past 18 months Anne and the working group have been working to clear the site and have started to notice some rather astonishing things.

“Last year I mentioned the bees to one someone and they were interested in having a look. As we walked up to the site from reception the Ragwort was flowering and on the flowers was the largest collection of Peacock butterflies I have ever seen.”

“There is a huge patch of nettles nearby where the butterflies must have laid their eggs and we arrived at just the moment that they emerged; they were all there drying their wings on the Ragwort. We were stunned. It was unforgettable.”

Further memorable moments on the site include a sighting of a rare Horehound Long-horn (Nemophora fasciella) a micro-moth, and spotting the Rest Harrow, a plant which Anne reported to the Norfolk Biodiversity Information Service (NBIS). Neither of these species had been spotted or identified in this area of Norfolk before.

“It’s partly because the area has not been gardened, cleared or maintained, so natural habitats such as nettles flourish. It shows the importance of managing spaces for a diverse habitat, and this is the balance we will be looking to maintain.” she says.