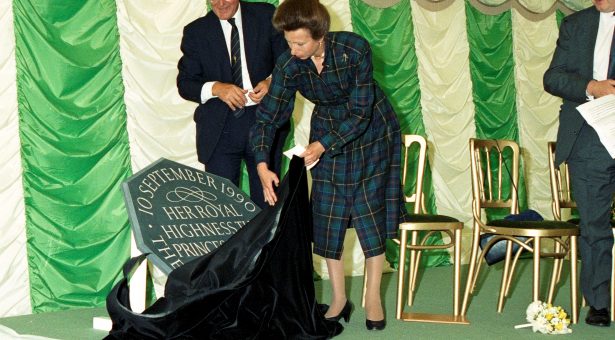 In 1990, the newly constructed Cambridge Laboratory, originally built to accommodate re-located staff from the Plant Breeding Institute and then later re-named the Biffen Building after geneticist and agricultural botanist Sir Roland Biffen, was opened officially by Her Majesty Princess Anne.

Prior to the Royal Visit, the site was a sea of frenetic activity; builders cleared away tools and debris, landscapers put the final touches to the magnificent courtyard garden and the Plant Breeding Institute’s collection of koi carp were reverentially introduced to their eye-catching new pond.

Finally, on the afternoon before the arrival of our very important guest, the last sod was laid with great ceremony. On-site security would be stepping up the following day and we would be required to remain in our buildings for the duration of the illustrious event.

That evening, one senior member of staff, who shall remain nameless, decided that the new garden was perhaps a little too formal and what it really needed to give it some character, were a few cheery garden gnomes. So, accordingly, the ornaments were purchased and placed strategically.

The following morning, when the Royal security guards spotted the new garden adornments, the site went into a major alert and lockdown.

The gnomes were rounded up and taken into custody (we thought they’d been hauled off to the Gnome Office). The new turf was rolled back up and sniffer dogs arrived to check every nook and cranny.

Fortunately, every blade of grass was back in place by the time the Princess Royal was escorted in for the grand opening.

The gnomes, of course, were nowhere to be seen though they did reappear, mysteriously, sometime later and in fact, if you know where to look, one can still be seen to this day.