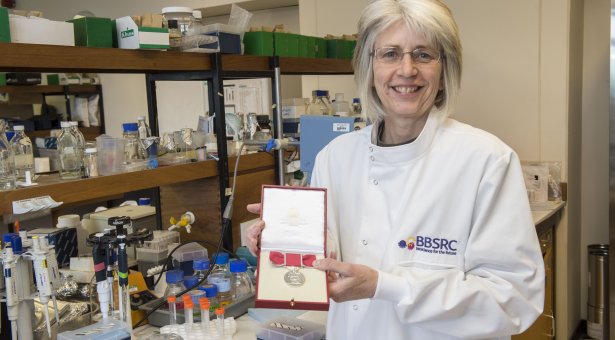 In 1987 Dr Anne Edwards joined the John Innes Centre, and things would never be the same again.

First and foremost, Anne is a distinguished scientist, who among other achievements was the first person to discover Ash dieback in the UK, when she spotted it in Ashwellthorpe Woods in Norfolk and for which she received a British Empire Medal.

It is not just her scientific impact that has made Anne a John Innes Centre institution. A font of John Innes history and an enthusiastic, passionate and infectiously lovely human Anne is also key cog in the social life of the institute. She is the go-to person for almost every question or if you want to hear a good story.

We could no longer keep her to ourselves, so we sat down with Anne and asked her to recount her favourite stories from her 30 plus years on-site here in Norwich, which we will run over the next few months.

Croissants in the morning

“One of the things that has changed most at the John Innes Centre during my time here has been the catering.

For a long time, all the catering was done in-house. Marjory and Daphne did the food, while Pat, who doubled as the cleaner, would serve tea and biscuits at 10:30am and 3:30pm in the Rec Centre. You knew it was Friday if the biscuits were chocolate. Lunch was also in the Rec Centre and everyone had it at the same time.

When the decision was taken in the early 1990s that the institute was outgrowing this arrangement and that external caterers would need to be brought in, a large staff meeting was held to canvass opinions. I remember, Jeremy Harbinson, who now works in the Netherlands stood up and optimistically said; “Maybe if we have outside caterers come in, we could have croissants in the morning”, a suggestion that was met with universal laughter.

I often wonder what Jeremy makes of the catering when he comes back.”