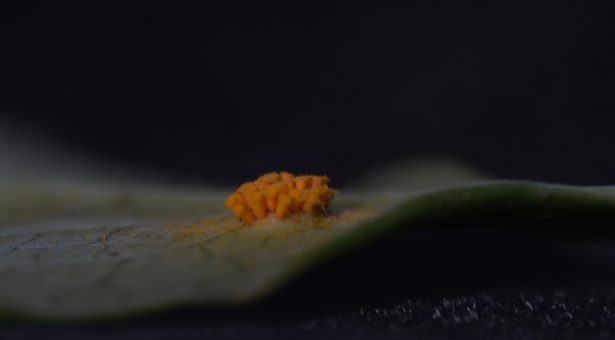 Researchers have shed light on a long-standing mystery concerning how fungal spores are released and dispersed.

Knowing how far these spores can travel could now help protect cereal crops from one of farming’s oldest adversaries, stem rust.

Working on the deadly stem rust pathogen, researchers from the John Innes Centre and the University of East Anglia (UEA) studied the dispersal of spores that are created from infection of the pathogen’s alternate host plant, the common hedgerow shrub barberry.

The study which appears in Communications Biology reveals the mechanism by which early-season spores are released from cluster cups of stem rust that form on barberry.

Stem rust spores are tightly packed in cluster cups and during dew or rainfall, water enters these structures, causing spores to expand. This process exerts substantial force on neighbouring spores, whilst the water filling the gaps acts as a lubrication film.

This facilitates a catapult-style expulsion of spores from the cup structure, with single fungal spores reaching speeds of up to 0.754 metres per second. The study also confirmed that spores can be released in clusters, which acts to increase ejection speeds. Following discharge, most spores then likely dissociate to enhance subsequent wind transmission to neighbouring crops.

By understanding this mechanism, it can now be used to aid farmers and legislators to assess the current local risk of disease spread from barberry bushes into neighbouring cereal crops. Based on these findings the team has produced a new web resource, which simulates dispersal patterns and allows users to predict the likely distance spores could spread from an infected barberry bush.

Wheat stem rust is known as the “polio of agriculture” due to the severe threat it poses to wheat production around the globe.

The barberry shrub plays a critical role in the fungus’s life cycle; it acts as the site of sexual reproduction and its infection creates a reservoir of rust spores that can spread the disease back into neighbouring cereal crops.

Despite the critical role of barberry as a source of wheat stem rust infection, the mechanics of how stem rust spores are released from barberry hedgerows and how far they can travel has puzzled scientists for more than a century.

Dr Diane Saunders, co-corresponding author, commented: “This research is particularly timely given that sporadic infections of wheat stem rust have been increasing in western Europe in the past decade and the popular hedgerow species barberry is also increasing in number. Knowing how far these spores can travel is crucial for guiding policy regarding safe distances for future barberry plantings from cereal crops, whilst also identifying current bushes at high risk as sources of future stem rust infection.”