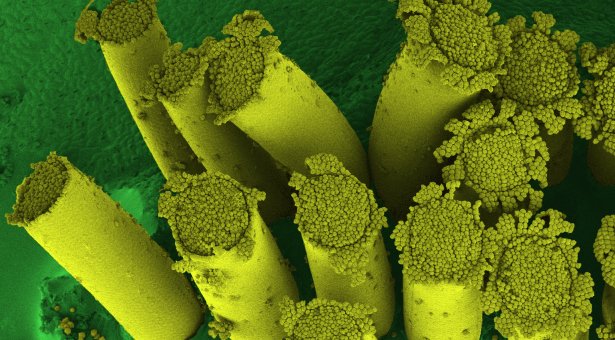 Re-planting of Barberry bushes might be the last chance to save the endangered Barberry Carpet Moth (Pareulype berberata), but suggested conservation methods could come at the cost of a UK cereal crop epidemic.

A recently awarded grant from BBSRC led by Dr Diane Saunders at the John Innes Centre has united researchers with conservationists to investigate how to promote habitat conservation without conceiving a virulent resurgence of UK stem rust outbreaks.

Barberry provides a vital habitat for the threatened barberry carpet moth but the bush also provides a safe overwintering space for a previously vanquished fungal disease in the UK called wheat stem rust, helping the fungus to diversify.

For the first time in 60 years, wheat stem rust (Puccinia graminis f. sp. tritici) was identified on a single wheat plant in a UK field. Furthermore, the identified strain of stem rust had the potential to infect around 80% of the currently planted UK wheat lines.

Although no further sightings have yet been reported on wheat, this discovery highlights the genetic adaption of the fungus to current cereal resistance and echoes recent outbreaks in Germany and Sicily that, unlike the UK, caused wide scale loses.

“In this programme we aim to strike a careful balance that addresses the immediate needs of the farming community, ensures future resilience in UK wheat by accessing the susceptibility of breeding material to wheat stem rust, whilst also conserving the biodiversity of UK fauna.” said Dr Diane Saunders.

Stem rust is a fungal disease affecting wheat, barley and rye that, although once was a challenge for farmers, until recently was believed to be eliminated in the UK. In fact, stem rust resistant cereal lines were acclaimed as a major component of the Green Revolution to prevent the disease, previously controlled through fungicides and the mass removal of Barberry bushes.

Barberry (Berberis spp.) plays a key role in the cycle of crop infection for various rust pathogens. It provides an alternative host plant for the fungi to infect and overwinter in the periods between crop seasons. Stem rust is known to go through a sexual stage that requires barberry, providing the opportunity for the fungus to genetically diversify in time for the planting of the next crop cycle. It is this stage that is thought to accelerate the ability for the fungus to overcome resistance, adapt to climatic constraints and increase in virulence.

To prevent the stem rust fungus from undergoing its sexual cycle and thereby reduce its genetic diversity, large scale campaigns and legislation to remove barberry were historically implemented across the US and Europe with the first as early as the 1600’s in France. The result of these movements were enormously successful in breaking this disease cycle and driving wheat stem rust to near extinction in Western Europe.

This initiative however was not without consequence on local fauna and the endangered status of the barberry carpet moth, a likely result. In a move to save the moth from becoming another victim of UK species loss, localised planting of Common Barberry (Berberis vulgaris) is being actively promoted to restore diminished habitat.

Mark Parsons of Butterfly Conservation said “We are very concerned about the potential risk from the possible re-establishment of stem rust in this country and the impact it could have on agriculture and the environment. The Barberry Carpet moth is an endangered species restricted to just a handful of sites in this country, it being reliant on Common Barberry for survival. We are, therefore, pleased to be working closely with the John Innes Centre both to minimise the potential risk from cereal rust, but also to enhance the populations of the Barberry Carpet, and therefore increase its chances of survival in this country.”

In order to understand the threat barberry poses as an incubation site for emerging cereal rust strains, this new program forges the first detailed study of bushes for cereal rust infection in the UK. This will identify the role barberry plays in enhancing the diversity of the many rust pathogens that use it as an alternate host including wheat stem rust.

Further, by characterising any cereal rust populations identified and screening our UK grown cereals in stem rust hot spots overseas, the potential future threat of wheat stem rust to UK cereal production can be deciphered to inform future resistance breeding if the pathogen was to re-emerge in the UK.

The biosecurity risk stem rust bears to UK agriculture was raised as a point of interest at the 2018 Houses of Parliament POSTbrief. Although the balance of the causes is a delicate one, it is only through their unity that we might ensure the UK’s agricultural resilience does not come at the avoidable loss of its biodiversity.

“This can only be achieved through close collaboration between scientists, conservationists, cereal breeders and the wider farming community,” Dr Diane Saunders.