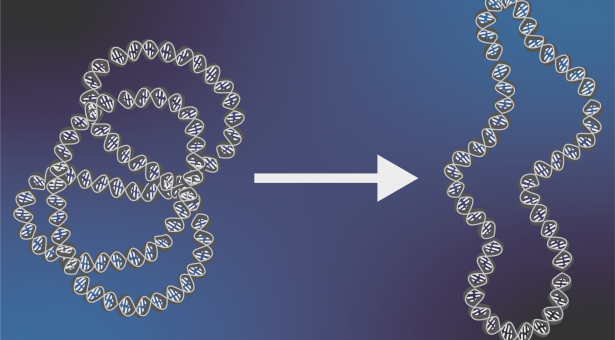 The function of an enzyme, critical to most forms of life, has been revealed.

A research team, led by the John Innes Centre found that the enzyme DNA topoisomerase VI (topo VI) performs a critical role in removing chromosome tangles that occur in the cell nucleus of plants.

This function enables the process of endoreduplication where the DNA content is doubled. Endoreduplication is the source of polyploidy, where a plant has multiple sets of chromosomes, including in some major crops.

Topo VI was discovered, many years ago, in archaea, a type of single-celled organism without a nucleus. It was only found in plants and parasites such as malaria, more recently leading to the scientific question: what is the function of this enzyme in eukaryotes, organisms whose cells contain a nucleus?

“Our study shows that topo VI in plants functions to remove chromosome tangles that occur during the endoreduplication process. This potentially explains its presence in plants where during endoreduplication, entanglements are most likely to occur,” explains lead author Dr Shannon McKie.

The team, a collaboration between the John Innes Centre and the National Institutes of Health, USA, used a combination of biochemistry and single-molecule analysis (using magnetic tweezers) to study the function of the enzyme in archaea.

“Our study gives unprecedented insight into the mechanism of action of this enzyme at the molecular level,” said Group Leader Professor Tony Maxwell and a senior author of the paper.

“This work may give us a clue to the role of topo VI in plasmodial parasites and suggests that the enzyme could be a target for anti-malarial drugs in the future. In plants too, topo VI could have potential as a target for herbicides,” he added.

The next stage for the research team is to purify plant and plasmodial topo VI enzymes to characterise their properties and develop them as potential drug targets.

Topoisomerase VI is chirally-selective., preferential decatenase is published in eLife.