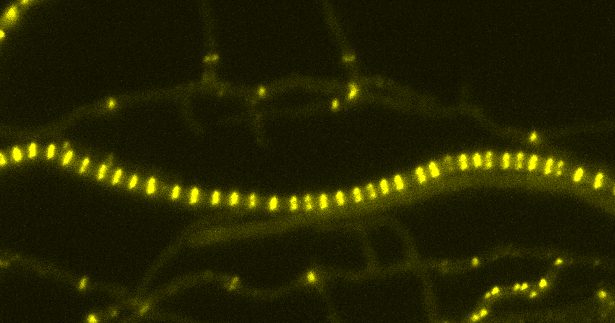 Researchers have identified a previously undescribed component that is important for the ability of bacteria to divide.

The findings by John Innes Centre researchers address the fundamental question as to how bacteria proliferate.

This work creates opportunities for further research into the cell biology of these organisms including studies aimed at better understanding the life cycle of harmful bacteria.

To grow and proliferate, bacteria (including the good and the bad) need to divide. Central to this process is a protein called FtsZ which assembles into a ring-like structure, called the Z-ring. For most bacteria, the Z-ring is essential to build the cell division machinery and for the synthesis of a dividing wall that allows the bacteria to physically separate.

Previously, there was little understanding of the mechanisms important for Z-ring assembly in a group of bacteria that include several medically and industrially relevant bacteria, such as the causative agent for Tuberculosis (TB), Mycobacterium tuberculosis, or the prolific antibiotic producers Streptomyces.

In a new study, researchers in the group of Dr Susan Schlimpert identified a novel cell division protein, called SepH, in Streptomyces that directly regulates the assembly of Z-ring.

SepH is a highly conserved protein found not only in Streptomyces bacteria but also more distantly related bacteria, including several human pathogens such as M. tuberculosis and Corynebacterium diphtheriae.

Using a combination of in vivo studies, biochemical analyses and live-cell imaging, the team demonstrated that SepH has a similar function in cell division in two different model species: the filamentous-growing, antibiotic producer Streptomyces venezuelae and the single-cell, non-pathogenic cousin of M. tuberculosis, M. smegmatis.

“Having discovered a novel regulator that directly interacts with the cell division machinery, we now have the opportunity to further dissect this interaction with the aim of identifying strategies for inhibiting this interaction and thereby preventing cell division. This would be of particular interest with respect to the treatment of TB, an infection that still leads to the death of over one million people per year,” said Dr Schlimpert.

Dr Matt Bush, co-first author of the study said: “SepH was predicted to be a DNA-binding protein which implied that it regulates the production of other proteins. However, the protein domain that was predicted to mediate DNA-binding was in fact crucial for the interaction with the protein, FtsZ. That was unexpected and exciting, as there are not many other examples known in which the DNA-binding protein is actually mediating a protein-protein interaction.”

The next focus of research will be to gain a better mechanistic understanding of how SepH binds FtsZ and modulates FtsZ activity.