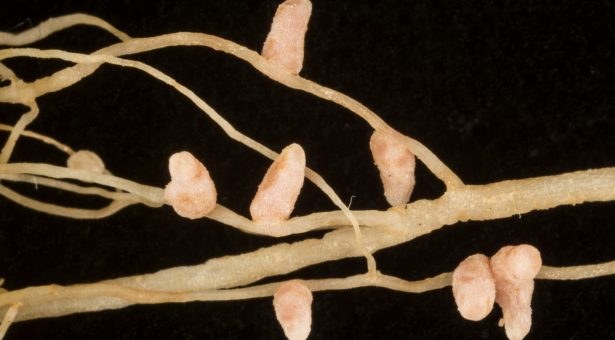 How plants acquire nutrients is a fundamental life process. Some plants have developed beneficial associations with bacteria and fungi to help them access essential elements such as phosphate and nitrogen.

Legumes such as beans and peas form symbiotic relationships with nitrogen fixing bacteria known as rhizobia. This capacity has positioned legumes as key crops to develop sustainable agricultural practices in both developed and developing countries. Understanding the process which allows these endosymbiotic relationships to happen may allow us to fine tune the physiology of legume crops.

By explaining the chemical signaling networks that underpin endosymbiosis, researchers can help address agricultural pollution – one of the main challenges facing us.

Previous research by Dr Myriam Charpentier’s group at the John Innes Centre had unearthed a protein that controls oscillations of calcium produced in the nucleus membrane of plant root cells. These calcium signals are activated upon recognition by the plant of beneficial bacteria in the soil. This in turn triggers the formation of root nodules which become home to nitrogen fixing bacteria – which harvest atmospheric nitrogen and pass it onto the plant in return for nutrients.

But it was unclear how this oscillation-mechanism was being modulated. In a new study which appears in PNAS (Proceedings of the National Academy of Sciences), the John Innes Centre researchers take an important new step in completing this picture by identifying the role of the signaling protein (CaM2) which regulates the calcium channels.

Using an engineering strategy, they show that the newly described molecule shapes the pattern of calcium signals. It does this by closing down the calcium channel which accounts for the trough in the oscillations.

“Our study shows that we can engineer specific signaling molecules to study their function directly in plants and that modulating calcium signaling could serve as a valuable strategy to enhance nitrogen fixing bacteria symbiosis,” said Dr Charpentier.