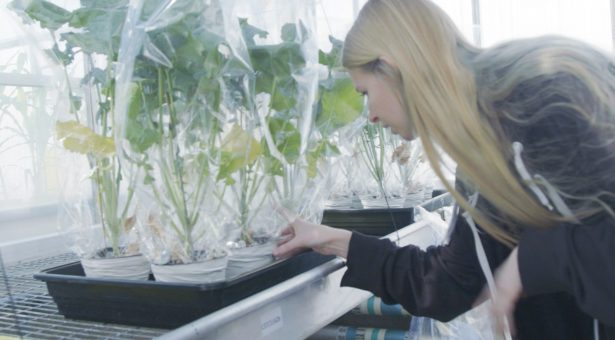 Plant science is the term given to a range of research and scientific studies that explore the estimated 410,000 species of land plant found on the earth.

Plant science encompasses ‘Botany’ from the Greek word βοτάνη (botanē) meaning pasture or fodder, in that it involves the observation of plant growth and characteristics and investigation into the relationship between plants and their environment. But it is also much, much more…

The huge diversity of research covered under the umbrella ‘plant science’ term, is well represented at the John Innes Centre.

For example the laboratory of Professor Enrico Coen  studies how small groups of cells in microscopic buds turn themselves into the diverse flower and leaf shapes we see all around us.

While, Professor Ray Dixon’s group focuses on how plants respond to environmental cues at a molecular level, to try and understand the process of biological nitrogen fixation in bacteria and its regulation.

The biochemistry and primary metabolism of plants, including the chemicals and molecules made by them, and the interaction of plants with pests and diseases are all important areas of research.

Professor Sarah O’Connor has published extensive work on the biosynthesis of complex chemicals by plants which can be very hard to make in the laboratory. As such, the potential to use plants as factories could be very valuable. After all, plants already excel at making complex chemicals, for example the Madagascan periwinkle, produces vinblastine and vincristine, both of which are used as anti-cancer drugs. It is impossible to produce these molecules in a conventional laboratory, but it may be possible to harness the power of plants to produce these life-saving drugs more quickly and more cheaplyr in the future.

Traditionally ‘Botany’ also included the study of fungi and algae, both of which remain the subject of research at the John Innes Centre.

The laboratory of Professor Barrie Wilkinson for example, researches the discovery and biosynthesis of microbial natural products, including those produced by bacteria and fungi, both of which are a major source of pharmaceuticals for the treatment of life-threatening diseases.

To compliment this, Dr Martin Rezjek is working on a cheap, safe and effective method of dealing with harmful algal blooms.

In the 21st century increasing numbers of plant scientists are working towards understanding the genetics of plants.

Many species have had their entire genomes sequenced, and the data has been shared and used to understand how the genetics of crops can allow for the development of new varieties that are more tolerant to climate-change or more nutritious for human consumption.

The first plant to have its entire genome mapped was the ‘not-so-humble weed’, the ‘model plant’, Arabidopsis thaliana (thale cress). To do this an This was accomplished by an international research team of over 200 scientists, from 35 laboratories. Our own Professor Mike Bevan oversaw the co-ordination of the sequencing of chromosome 4.

At the John Innes Centre we aim to increase understanding of plant genetics and plant biology and to exploit plant biodiversity to enhance crop performance in a sustainable way,.

In 2018, working in partnership with colleagues at the Earlham Institute, The Sainsbury Laboratory and the European Bioinformatics Institute, we were able to publish the most accurate and complete DNA sequence analyses of the notoriously complex wheat genome to date.

Meanwhile, Dr Judith Irwin, working with Dame Professor Caroline Dean, has translated our understanding of how plants control and regulate flowering time from fundamental research using Arabidopsis, to enable the control of flowering in the broccoli plant, and use this knowledge to develop a new, fast-growing broccoli.

Genetic modification and gene editing are techniques used by plant scientists to alter the characteristics or traits of plants by changing their DNA.

These technologies can inhibit the expression of harmful traits or introduce new characteristics which are of benefit, and work toward the same goals as traditional plant breeding but in a more controlled and speedier way.

We rely on plants for food, and this means that environmental changes, including climate change, have major consequences for humankind.

Understanding and preserving plant biodiversity are key for the protection of our food supply and for saving iconic species like the ash tree (Fraxinus excelsior).

Understanding the impact of the environment on plants and their genes, and working on designing future wheat are the focus of two of the strategic programmes at the John Innes Centre.

Our own history in plant science dates back to the early 20th Century and the death of London property developer and philanthropist John Innes (1829-1904).

Innes’ last will and testament instructed that the bulk of his fortune to be used to establish a school for horticultural instruction or a local museum and art gallery.

The John Innes Horticultural Institute would be an advanced training school for gardeners, a fruit-breeding research station and an institution for “horticultural experiment and research with an emphasis on plant genetics”.

Over 100 years later the John Innes Centre is internationally recognised as a world leader in genetics, microbial research and plant science.