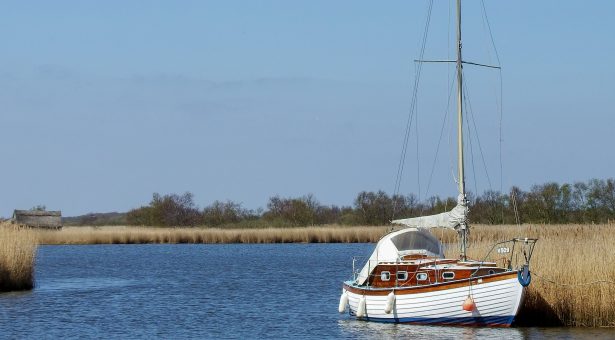 A cheap, safe and effective method of dealing with harmful algal blooms is on the verge of being introduced following successful field and lab tests.

Moves to adopt use of hydrogen peroxide (H2O2) as an effective treatment against toxic algae are already underway following the results of new research by a team from the John Innes Centre and the University of East Anglia (UEA.)

Successful trials last summer showed that H2O2 was effective against the golden algae, Prymnesium parvum. This is responsible for millions of fish kills worldwide each year and a threat to the £550m economy of the Broads National Park where trials are taking place.

Now follow up lab tests have demonstrated that controlled doses of the versatile chemical compound could be even more effective in dealing with cyanobacteria commonly known as blue green algae – a major public health hazard and potentially fatal to dogs and livestock.

Some of these exciting results are published today in the journal Biochemical Society Transactions along with a series of other scientific developments related to algal communities in the Broads National Park; one of the UK’s most popular and environmentally important network of waterways.

Dr Ben Wagstaff, one of the authors of the study from the John Innes Centre said: “We’ve demonstrated that the use of hydrogen peroxide is a practical, relatively easy way of managing these blooms. Work has already started to put together protocols for the use of hydrogen peroxide to control Prymnesium and our research showed that blue green algae are even more susceptible. You can potentially use even lower doses to wipe out blue-green blooms.”

The work in the Broads National Park could have widespread implications for the way harmful algal blooms are managed in waterways worldwide.

Steve Lane, Fisheries Technical Specialist at the Environment Agency which is helping to implement the research said: “It is really exciting how scientists, fishery managers, the angling community and partners have worked together and made such important progress to tackle Prymnesium, which is a serious threat to the multi-million-pound angling economy of the Broads. We are now working hard to make sure that we can use hydrogen peroxide to help manage future incidents, guided by the wonderful world-leading work that has taken place right here in Norwich.”

Dr Wagstaff says that it’s not practical to treat much larger water systems in this way. But the adoption of H2O2 in smaller lakes and watercourses popular for sailing and water pursuits means they would no longer have to close for long periods when blooms occur.

Fisheries also stand to gain with the team already working with one business in Suffolk to deal with an outbreak of harmful blooms.

Following successful field trials at Hickling Broad, Norfolk, last summer, detailed laboratory tests have been carried out which demonstrate how the H2O2 treatment impacts the complex array of species in the water. The tests showed that within two hours blue-green algae is significantly reduced by doses of H2O2 to a greater extent even than Prymnesium and other algal organisms.

The tests showed that fish and macroinvertebrates were unharmed by the treatment. Furthermore, both this study and others have shown that ecosystems in open waterways recover within days to weeks after H2O2 is applied.

Follow up trials involving the Prymnesium Stakeholders Group a multi-agency network that includes John Innes Centre/UEA researchers the Environment Agency, angling/environmental groups and the Broad Authority are looking at how best to apply H2O2 so that it can be most optimally dispersed in the water.

For Dr Wagstaff and colleagues, the results mark a four-year cycle in which the research has taken great strides:

“Five years ago, staff at Whitlingham Broad here in Norwich approached us about blue green algae and we couldn’t help. Now it may be possible.

“People have used hydrogen peroxide before. But it’s use is not widespread. It just needs to be adopted and used in line with protocols so that more and more people realize how quick, cheap and effective it is”.

“The Broads Authority has contributed to this important research, which is testing practical solutions for dealing with fish kills resulting from Prymnesium. In addition, despite considerable water quality improvement over the past two decades, blue green algae is a problem for water users in some areas of the Broads National Park. The use of hydrogen peroxide in the Broads is a potentially useful new management tool, if approved for use, and we welcome further testing and work with the John Innes Centre.”

Read the full report on our algal bloom breakthrough

With the results of fundamental research likely to be several years away, there is a current need for practical solutions to mitigate a growing rise in harmful algal blooms caused by rising temperatures and eutrophication, the report in Biochemical SocietyTransactions states.