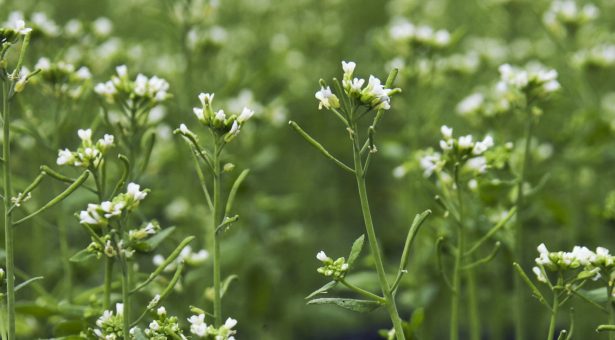 Plants have unique ways of sensing their environment, how they respond is vital for their survival, and it influences development and physiology. Understanding that can help us produce more sustainable food in the future.

Plants are often underestimated, viewed as passive and may be overlooked. They are in fact impressive, complex organisms, taking all that nature throws at them – good and bad – while rooted to the spot.

How they sense the world around them is also the subject of a fascinating blog published earlier this year, which explores how plants are able to detect light, temperature, scents and more.

But how does this ability to sense lead to physiological changes?

From the initial sensing of the environment – either abiotic (something physical, like temperature) or biotic (something living, like bacteria) – a cascade of signalling occurs inside a plant, which leads to changes at the genetic, and even epigenetic, level. It even involves those bits of DNA you once might have been told was ‘junk’.

To explain how this works, we’re going to take a look at two crucial aspects of a plant’s life cycle that are very important for breeding better crops: nutrient uptake and flowering.

Getting to the roots of nutrient uptake

Proteins are made up of lots of nitrogen, and plants go to great lengths (via sometimes sprawling roots) to scavenge it from the soil.

Some plants, such as beans and peas, go a step further – forming symbiotic relationships with bacteria that live in harmony with roots and harvest nitrogen from the air.

Dr Myriam Charpentier and her team are fascinated by this process of how plants are “fighting off the bad and buddying up with the good”.

In 2016, Charpentier and colleagues unearthed an important protein, a calcium channel in the nucleus membrane, responsible for shuttling calcium into the nucleus when friendly bacteria are sensed nearby.

Oscillations of calcium driven by this protein trigger plants to form ‘nodules’, which are like tiny houses for the nitrogen-fixing bacteria. More recently, the group found that calcium can also be released from the nuclei of cells at the growing tip of the root itself (the apical meristem).

Not only that, tweaking the calcium signatures produced longer or shorter roots, indicating that calcium may play an important role in how the roots themselves develop.

Calcium signals are ubiquitous in plants, and they are incredibly specific.

You can think of calcium signalling like a morse code that helps plants not only detect friend from foe, triggering primary defence mechanisms against pathogens, but also reacting to all aspects of their environment.

The control that plants exercise over them – including the release of calcium by specific proteins in the nucleus as we’ve described here – is not only fascinating, but it can also help us understand how plants are able to fine-tune their physiology.

That might allow us, in turn, to fine tune plants that yield more or grow better in certain conditions.

“More than 50 million tonnes of nitrogen fertiliser are sprayed onto our crops each year, and this leads to pollution and loss of diversity both in the soil and in aquatic systems. We cannot go on like this. We urgently need to minimise the detrimental effect on ecosystems while ensuring sustainable food production,” says Dr Charpentier.

As well as reacting in the here and now, plants are also able to ‘remember’ conditions. It’s absolutely key to one of life’s most wonderful spectacles – the blossoming of flowers in spring after a long, cold winter.

But why do some plants wait for winter before flowering?

It’s an important question that Professor Dame Caroline Dean and her group have worked to answer in great detail, and involves a process known as vernalization.

There are, of course, various genes and molecular interactions involved in the timing of flowering, but the wintry tale of vernalization really converges on one: FLOWERING LOCUS C (FLC).

FLC is a central repressor of flowering time, meaning that it ‘switches off’ flowering. In essence, when FLC is being actively transcribed there are no flowers. When it’s not, we have the potential for blooms.

Perhaps the coolest part of this is that plants ‘remember’ winter thanks to a subtle tweak to the structure of the chromosome where FLC is found.

Chromosomes – the x-shaped structures in which DNA is packaged in the nucleus – are scaffolded by proteins called histones, which the DNA wraps around to form a material known as chromatin.

Chromatin is no mere packaging material, however. It is dynamic and it impacts how genes are expressed.

When histones have a methyl group either added or taken away by enzymes, genes can be switched ‘on’ or ‘off’. That’s because when methyl is added, the histones bind DNA more tightly, preventing the right proteins from accessing it.

In the case of vernalization, prolonged cold triggers special histone-tweaking enzymes to modify the histones packaging FLC in several important positions, ‘switching off’ the FLC gene. Short periods of cold don’t have the same effect.

As springtime comes, and plants begin to sense the days becoming longer and a little warmer, these subtle ‘epigenetic’ changes mean that plants are primed, ready to flower.

What’s even more interesting is that it is from the DNA on the opposite strand of the FLC gene that regulatory components are housed. This strand makes a set of antisense transcripts collectively known as COOLAIR, which help the protein complexes find and bind their target.

COOLAIR is a long non-coding RNA, known as this because they don’t make proteins but have a big effect on gene expression. Long non-coding RNAs are becoming increasingly well studied in many organisms, and vernalization is one of the best examples of their role.

So don’t believe that person who tells you that DNA is mostly ‘junk’.

More than a snazzy bouquet

Not just the pretty face of the plant kingdom, flowers are essential to produce food such as fruits, nuts, seeds, oils and various vegetables.

For some, it might be that a simple tweak could be the difference that means multiple harvests a year are possible, or understanding how subtle variations might affect harvest times.

Professor Dean and her group recently published research that showed small variations in DNA in and around FLC that affect histone modifications could explain how different plants of the same species could tolerate winters of differing lengths.

Complementing that nicely, the group of Professor Richard Morris recently showed how multiple versions of FLC in oilseed rape were responsible for how vernalization and flowering time differed between varieties adapted for different growth seasons – spring, summer and winter.

Professor Morris’ group uses mathematical and computational modelling to understand how plants respond to their environment, and along with the Dean group are using those techniques to pioneer new methods to predict flowering time.

Gearing our crops for future success

As our climate continues to undergo dramatic change, leaving life on Earth with increasingly extreme conditions to negotiate, the information gleaned from techniques such as mathematical modelling could be invaluable for understanding the capacity of our crops to adapt.

Tied with the in-depth knowledge garnered from understanding the genetic and physiological changes that occur in crops as they react to their environment, we hope to be able to breed crops that are resilient to what the climate may throw their way.