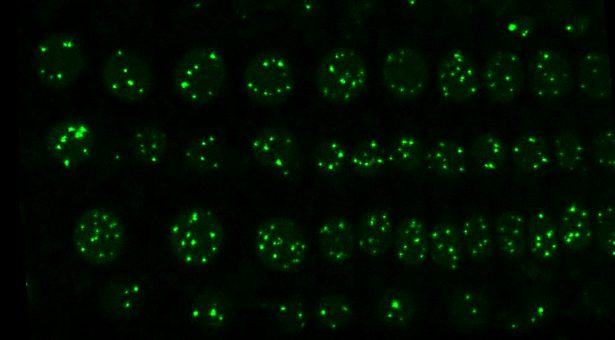 As the weather cools in autumn, you may notice the process of condensation, with water droplets forming on windows.

Researchers have found that a similar process – biophysical condensation – is happening inside plants and allows them to sense fluctuating temperatures.

The ability to sense seasonal changes is crucial for plants to grow and reproduce at the right time of year.

First author of the research Dr Pan Zhu says, “Our findings are helpful for understanding how plants sense fluctuating temperature signals – and it is temperature fluctuation that is predicted to become more extreme with climate change.”

One gene in particular is important for how plants remember changing seasons: Flowering Locus C (FLC). It acts as brake on flowering which is lifted in spring, so the plant is ready to flower.

While a lot is known about how FLC is epigenetically switched off and stays turned off through winter ready for spring, less is known about the initial process known as ‘transcriptional shutdown’ when FLC DNA stops being used by the cell.

When there are warm temperatures, the FRIGIDA protein is free to move back to FLC DNA and make sure that the brake on flowering remains. This stops the plant from flowering too early if there is lots of warm weather in autumn.

The researchers from the group of Professor Dame Caroline Dean at the John Innes Centre uncovered the biophysical mechanism using the model plant Arabidopsis thaliana.

This research which appears in Nature gives new insight into how plants sense fluctuating temperatures at a time when this knowledge is important for crop improvements in the face of climate change.

This newly discovered role of biological condensation in regulating the genetics of plants suggests that the process may be used in other ways in plants, to allow them to respond to other changes in the environment.

Experiments and findings in focus

The research team found high levels of FRIGIDA accumulate in the cold. Under closer inspection using microscopy they saw that it builds up in the nuclei of plant cells, where the DNA is housed, and forms biomolecular condensates. Biomolecular condensates are micron-scale compartments of concentrated proteins.

Further biochemical and visualisation techniques, including using a timelapse temperature-controlled microscope, found that the protein condensates disappear within five hours of warm temperatures, but return after a six-hour period of cold. Experiments showed how condensation of FRIGIDA is responsible for the transcriptional shutdown at FLC.

The study also uncovered how the FRIGIDA condensates fit into the broader picture of regulation of FLC as Dr Zhu explains, “Another interesting finding was that a specific isoform of long noncoding RNA COOLAIR, the antisense transcripts from FLC locus, contributes to the cold induced FRIGIDA nuclear condensate formation. This reveals one kind of mechanism for how COOLAIR-mediated FLC shutdown occurs during early vernalization.”