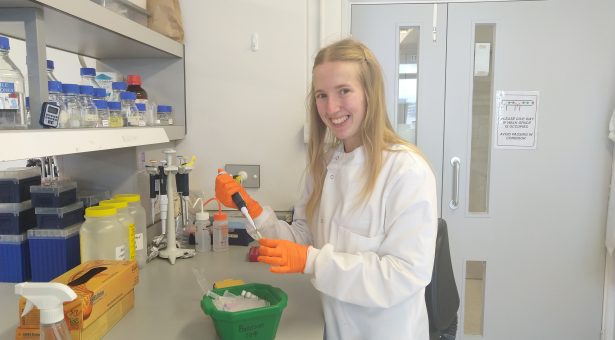 Each June, we host a Year 10 Science Camp, giving students the chance to experience life at a plant and microbial science research institute.

Over the course of a week, the GCSE students explore how some of the world’s leading scientists conduct their research, while learning about all the ways in which the science of today is the reality of tomorrow.

Alongside inspiring students to want to pursue biology careers of their own, the students are also involved in active research. For example, in 2014 our Year 10 Science Camp students helped identify a new fungus.

We are delighted that one of the students from that year, Rose McNelly has returned to the John Innes Centre as a PhD student in the Dr David Seung lab.

We caught up with Rose about her experience on the Science Camp, what she has been up to since, and her current research project.

“During high school I really enjoyed science because I loved that you could use experiments to answer questions about the world around us.

Recognising my enthusiasm, my GCSE biology teacher suggested that I apply to the John Innes Centre’s Year 10 Science Camp as it would be a great chance to learn what studying science post-GCSE would be like. I wasn’t expecting to get a place, but I was so excited when I got the letter confirming that I had.

I attended the Year 10 Science Camp back in 2014 and I loved all the practical sessions we had in the lab.

The only labs I had been in before attending science camp were at my high school so the labs and equipment at the John Innes Centre felt very high-tech.

I vividly remember extracting DNA from blueberries which is something which I had never done before, and I was amazed that we managed to get DNA from the fruit so quickly and easily.

Before attending the science camp, I didn’t believe that it was possible to have a career as a scientist. Chatting with PhD students and other scientists during the week showed me that it was absolutely a possibility.

During the week, I met many scientists who were just like me. It showed me that becoming a scientist was achievable and gave me something to aspire to.

I enjoyed science camp so much that I decided that I wanted to pursue science as a career. So, after finishing my GCSE’s I studied for A Levels in Biology, Chemistry and Maths before pursuing a degree in Natural Sciences at the University of Cambridge.

Attending the Year 10 Science Camp was definitely an advantage as many of the techniques I was introduced to during the week at the John Innes Centre popped up while studying for my A-Levels and undergraduate degree, so I had a head start on my colleagues.

Also, the connections which I made during the week helped me to secure summer placements back at the John Innes Centre during my university summer holidays.

When considering where to apply for my PhD the John Innes Centre made perfect sense, not only is it a world-leading institute for plant science but it was also where my scientific journey began back in 2014.

I am now at the start of the second year of my PhD on the John Innes Foundation Rotation PhD programme.

I am working in the Seung group where I am studying starch in Aegilops tauschii, which is a wild relative of wheat.

I’m combining techniques from bioinformatics, genetics and biochemistry to discover and characterise factors which control starch granule initiation and morphology.

What I learn from Aegilops tauschii will then be applied to wheat. Understanding starch granule formation in wheat is particularly important because it forms a key part of our diets and has roles in other processes, such as paper production.

So far I am loving my PhD, I really enjoy working in the lab and how varied my day to day work can be. I now truly understand why the students I spoke to whilst on science camp were so enthusiastic about their PhDs.

I am still at a relatively early stage in my PhD so for the short term my career will be focussed on finishing my PhD and hopefully making an impact on the starch field. Beyond this I am not sure what the future holds, but one thing is for certain – I will definitely remain in science in one way or another.”