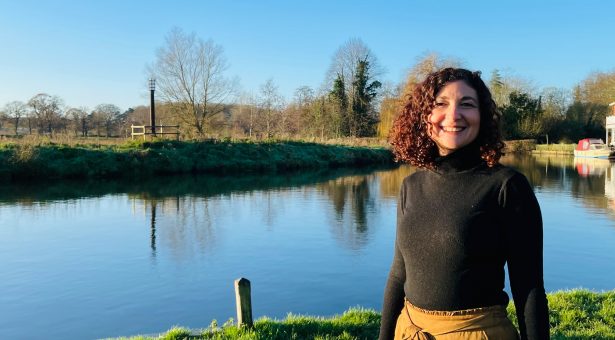 After roles in the Phil Dale and Clive Lloyds labs, Sam joined the Professor Enrico Coen lab in 2004, going on to spend 16 years contributing to their world-renowned research on plant shape.

As well as an active RA, Sam played an integral role in setting up a number of initiatives and events aimed at inspiring the next generation of scientists.

Earlier this year, after completing her PhD, Sam left us to focus on one of those inspirational projects, moving to become a full-time Director of the Youth STEMM Award, a not-for-profit organisation Sam co-founded during her time here.

We caught up with Sam to hear the story of her career and check in with how it’s going. First, we asked her, what is the Youth STEMM Awards?

“The Youth STEMM Award is a skills award for students in years 9-13, designed to support and inspire the next generation into STEMM, which stands for Science, Technology, Engineering, Maths and Medicine.

Students take part in STEMM-related activities at school, online or at home and log them to our e-portfolio, creating a record of achievement great to help with applications for higher education and employment.

Running the awards requires a lot of different skills. Since there are so few people in the organisation, I do most things myself and it means my role is quite varied.

Thankfully, through my time at the John Innes Centre I worked in three different groups on many diverse topics within plant science. As a scientist I became proficient at many laboratory techniques but it is those other skills such as organisation, communication and teamworking that have really helped me move away from the bench and into business.

Communication is probably the most important skill I use. I have virtual meetings most days with collaborators to discuss projects we are working on or with others who might want to collaborate in future, there is a lot of networking.

I create all our marketing and design materials, so I have had to become a bit of an expert user of Adobe InDesign. I recently launched a monthly newsletter and create and curate content for that that I think will be of interest to our readers.

I also do a lot of presentations, these might involve pitching for investment, showcasing the YSA to teachers, or training those who will be running the Award in their school. Being able to put together a really good presentation is incredibly valuable (thank you Rico for the years of Coen-lab training).

Digital skills have also played an important role and the fact that I know my way around an excel spreadsheet has certainly come in handy for managing the finances.

If I am also working on a consultancy project I have to balance my time so that nothing gets forgotten. I used to have lists all over the place, now I have one notebook with a daily list that either gets completed or the items carried forward to the next day, so I never lose track of anything.

Working for myself is great but I miss the people and community at the John Innes Centre and across the Norwich Research Park. It is a unique place and very vibrant. There was always someone to talk to over a coffee break and someone to share ideas with.

My career path began at the University of East Anglia, where I was inspired as an undergraduate by lectures on plant science by Caroline Dean and Des Bradley.

After graduating from UEA I stayed on for a Master’s by research studying plant disease resistance. Fortunately, I received a scholarship from the Gatsby foundation and this really helped me to secure my first job as a Research Assistant at the John Innes Centre, in what was then the ‘Brassicas and Oilseeds Research department.’

What was initially a two-and-a-half-year contract extended into a 20-year career.

My research focused on how plants generate their amazing leaf shapes through coordination of cell division and orientated growth according to an underlying biochemical-based polarity system. I was part of the team that produced the first computer model that explained leaf shape transformation according to biologically validated observations.

Each new project provided me with the opportunity to learn new skills and develop my role, gradually becoming more senior with additional responsibilities. Alongside my research I found enjoyment in communicating science and taking part in school engagement and outreach.

I developed numerous school outreach events including the Women of the Future Conference and the Year 10 Science Camp as well as founding what would become the Youth STEMM Award CIC, which I launched as an independent community interest company in 2016.

In 2012 I became a champion for equality and diversity and later was part of the team who helped the John Innes Centre achieve the Silver and Gold Athena SWAN Awards.

As my list of publications grew so did the niggling feeling that something was missing. It was thanks to senior colleagues who first suggested that I look into undertaking a PhD by Publication and I am hugely grateful to the John Innes Centre for funding me to undertake this and the support of my supervisor, Rico Coen.

It was far from easy to find the time to write up my thesis alongside my role in the lab at the same time as running the Youth STEMM Award.

As the end of my 5-year project loomed I decided that rather than apply for another role I would take a break from research to write up my thesis and have a go at making the Youth STEMM Award my main job and a sustainable enterprise. So, I booked myself into a library carrel and for three months and focused on little else but writing. I loved the experience and though it was stressful at times, the effort paid off and I passed on viva day without corrections.

Now, some 10 months later, I am working for myself as the director of the Youth STEMM Award with sponsorship from high profile organisations including UEA, the Wellcome Genome Campus and the wonderful John Innes Centre who continue to support our mission to support and inspire the next generation into STEMM.

Graduating with a PhD is without doubt the highlight of my academic career (that and the first author Science paper that I hardly ever mention…) and something I am proud of having achieved.

In my ‘other’ career as a social entrepreneur, having transformed what was initially an idea (emailed to Dale one afternoon), into an organisation that is helping young people across the UK is something I am incredibly proud of. The YSA would not have happened if it were not for the support John Innes Centre.”