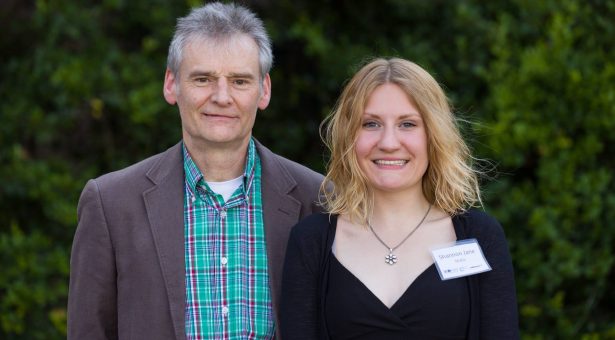 Earlier this year Shannon was awarded the Gregory Paul Lenardo Basic Science Award for her research.

We sat down with Shannon, to find out why she chose her project, how she found studying abroad and what are future plans are after finishing her PhD.

“During my undergraduate degree in molecular biology and genetics, I gained experience in Professor Tony Maxwell’s group at the John Innes Centre. I studied antibiotic resistance, and thoroughly enjoyed it.

So, when he offered me the opportunity to apply for a scholarship funded by the Wellcome Trust and the National Institutes of Health (NIH) I went for it. With my interests in molecular biology and enzymology, it was an excellent opportunity.

DNA topoisomerase proteins are fundamental to cellular viability and are often the targets of antibiotics, such as the broad-spectrum quinolone drugs, or of chemotherapeutics, such as etoposide, to treat a wide range of cancers.

However, topo VI is quite different to the topoisomerases that are targeted by these compounds and far less is known about how this enzyme works and its role inside cells.

Topo VI is mainly found in archaea, which are a type of organism similar to bacteria. But intriguingly, topo VI has also been identified in plants, where it is crucial for some forms of DNA replication.

However, our understanding of how topo VI works in plants has been plagued by issues surrounding protein expression. As such, my project involved the characterisation of an archaeal topo VI that was relatively easy to purify.

My role was to characterise the enzyme further and this came with little constraints on which aspects I could focus on.

As a new PhD student, having the freedom to shape the course of my own research was not only enjoyable but also gave me a stronger sense of ownership and taught me vital skills in critical thinking and innovation.

My project was split between the John Innes Centre and the National Institutes of Health in Maryland, USA.

I was incredibly lucky to have a far wider range of techniques at my disposal. This allowed me to characterise topo VI to a depth not previously applied to this particular enzyme, facilitating the discovery of new mechanistic aspects and helping advance our understanding of what it does in organisms and how its activity is controlled.

That said, I was fearful of moving to the USA on my own for two years. It was not something I had ever imagined for myself prior to securing my studentship and I had very little experience travelling abroad in general.

Thanks to the support of my supervisor, I overcame this initial trepidation and pushed myself outside of my comfort zone. This has become one of my greatest sources of pride, as even though it was extremely challenging to be so far from home, the ways in which I developed as both a scientist and person are invaluable.

I’m a far better version of myself for it and would encourage anyone in a similar position to me to give it their best go. You really can’t foresee the connections you will make or the science you will be involved in. If I could have shown myself what would come from my time there, I would have spent a lot less time worrying.

The NIH itself is a great place to work for science, allowing researchers to find innovative ways to answer complex questions.

My two mentors, Professor Tony Maxwell and Dr Keir Neuman (NIH), nominated me for the Gregory Paul Lenardo Basic Science Award, in secret so it was an amazing surprise when I found out it had been awarded to me.

The award was set up by Dr Michael Lenardo (NIH) in loving memory of his brother and is awarded once a year for discoveries in fundamental cellular, molecular, or genetic processes using model systems that advance scientific understanding of biological processes in higher organisms.

To have my work recognised in this way brought me a lot of pride and was not something I had imagined happening.

Now I have finished my PhD I’ve been asking myself what my true scientific passions are and what I need to do to get where I would like to be.

Thanks to my PhD, I’m sure that molecular biology, particularly mechanistic characterisation of proteins, is something I enjoy

I find it fascinating that even though we cannot see these minute objects with the naked eye, we are able to gain deep insight into the workings of the molecules on which our lives depend.

I’ve decided to explore my longstanding interest in human disease and have recently been appointed as a postdoc at the Cambridge Institute for Medical Research with Dr Janet Deane, where I will be exploring the molecular mechanisms underlying neurological disease caused by dysfunctional lipid metabolism.

This means I will be making a switch from microbial to human cell research so I envision another steep learning curve, but I am very excited for this next phase in my career, taking this positive step towards securing my future in a field I’m passionate about.”

The image at the top of this page was taken by Daniel Sone, LLC.