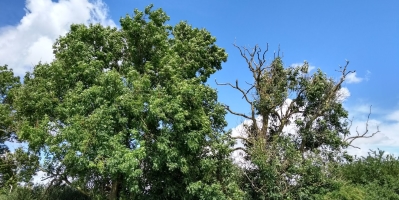 The disease that had decimated 60 to 90% of ash woodland in Denmark was about to invade.

Within a matter of months the Nornex consortium was formed to exploit the UK’s research infrastructure and capability to investigate and combat the threat.

Genome sequencing, bioinformatics, genetics, ecology, computer gaming and phone app technology were all deployed and the general public were mobilised through crowd-sourcing to monitor and report the spread of the disease.

By 2014, the genome of the fungus (Chalara fraxinea / Hymenoscyphus pseudoalbidus) had been sequenced and the invasive pathogenic strain traced to Japan.

While headlines warn that Ash dieback is now “unstoppable” with their demise threatening hundreds of insects, mosses, lichens and birds. Our research outputs offer a real prospect that a natural recovery process can be initiated that will maintain ash biodiversity.

“It is a tribute to the enthusiasm of the scientists involved, the benefits of international collaboration, and the funding from the BBSRC and Defra. This rapid and effective response was only possible because of sustained UK investment that has maintained our National research capability” said Professor Alan Downie.

In September 2017 tighter controls on timber and plant movements into Europe were called for to prevent further disastrous effects of plant diseases, following a new study of the Ash dieback pathogen.