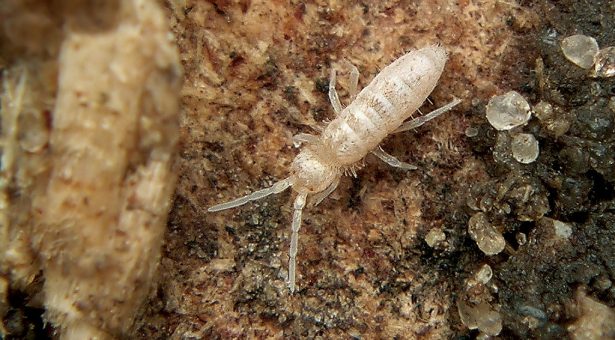 You may not have heard of geosmin but, wherever you may be on this planet, it is highly likely that you’d recognise its smell.

Geosmin is the soil-based compound that gives the evocative, earthy smell so characteristic of spring. It’s best appreciated after recent rainfall or while digging. The human nose is so sensitive to the compound that it is detectable at one hundred parts per trillion. In other words, we can sense geosmin better than sharks can detect blood.

But why does it exist, this odour that has perfumed the planet for nearly half a billion years? New research by scientists in Sweden and the UK has helped to explain why.

The secret, according to the study published in Nature Microbiology, lies in an ancestral mutual relationship between the soil bacteria Streptomyces and primitive, six-legged creatures called springtails (Collembola).

Streptomyces are globally significant bacteria that produce a range of organic compounds, including chemical weapons to fight off enemies in the soil. These have been exploited for human use as some world’s most effective antibiotics.

They also produce geosmin and a range of other volatile organic compounds (VOCs). While Streptomyces species vary drastically in the types of molecules they produce as antibiotics, they all, without exception, produce geosmin.

“The fact that they all make geosmin suggested that it confers a selective advantage on the bacteria, otherwise they wouldn’t do it,” explains Professor Mark Buttner of the John Innes Centre, one of the authors of the study.

“So, we suspected they were signalling to something and the most obvious thing would be some animal or insect that might help distribute the Streptomyces spores.”

To find out what might be attracted to the smell of geosmin, researchers in Sweden leading the collaboration laid out a network of traps baited with Streptomyces. Others were baited with control substances.

The experiments revealed that springtails were attracted to the Streptomyces bait. Further controlled experiments carried out in the lab involved inserting springtails one by one at 20-minute intervals – to avoid herd responses – into a Y-tube to observe if they followed the scent of geosmin and other VOCs.

Finally, the team used a method called electroantennography – which involves inserting tiny electrodes into the antennae of the 1.5 mm-long springtails – and observing their responses to a succession of molecules.

All these experiments added up to one clear observation: the springtails were powerfully drawn to geosmin and to another earthy smelling compound produced by Streptomyces called 2-methylisoborneol (2-MIB).

But why has this relationship evolved during the half a billion years since the Streptomyces genus arrived on the planet, around the same time that Collembola separated from insects?

The study finds that geosmin and 2-MIB are chemical signals that guide springtails to Streptomyces as a privileged food source – one that kills other organisms such as nematodes and fruit flies – but which springtails can withstand because they have a battery of enzymes which detoxify the antibiotics produced by Streptomyces.

In return, springtails help disperse Streptomyces spores in two ways: by defecation and by distribution of spores that stick to their bodies. The study found that the spores survived passage through the springtail gut to give rise to new colonies of Streptomyces.

Professor Buttner explains: “There is mutual benefit. The springtails eat the Streptomyces, so the geosmin is attracting them to a valuable food source. And, the springtails distribute the spores, both stuck on their bodies and in their faeces, which are full of viable spores, so the Streptomyces get dispersed. This is analogous to birds eating the fruits of plants. They get food but they also distribute the seeds, which benefits the plants.”

Genomic analysis completed the picture by revealing that the genes in Streptomyces that make geosmin are under the direct control of the same regulators that control sporulation.

This mechanism coordinates the emission of geosmin and 2-MIB with the final stage of colony development when spores are produced.

“These insights provide an explanation for the previously reported correlation between geosmin production and sporulation in Streptomyces,” explains Professor Buttner

“We used to believe Streptomyces spores were distributed by wind and water but there is little room for wind or water to do anything in the small air compartments in the soil. So, these small primitive animals have become important in completing the lifecycle of the Streptomyces, one of the most important sources of antibiotics known to science,” he adds.

So next time you walk in the woods or dig your garden and notice the smell of spring, spare a thought for the springtails and Streptomyces toiling in the soil below; an example of chemical communication that’s endured for 450 million years.

The top image; ‘Springtails’ by Ryszard I is licensed under CC BY-NC 2.0