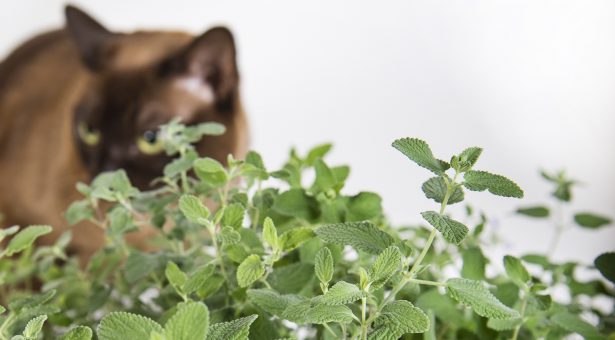 Researchers at John Innes Centre have shed light on how catnip – also known as catmint – produces the chemical that sends cats into a state of wanton abandon.

The remarkable effect catnip has on cats is well known thanks to the scores on online videos showing pets enjoying its intoxicating highs.

The substance that triggers this state of feline ecstasy is called nepetalactone, a type of chemical called a terpene. This simple, small molecule is part of an unusual chain of events, not previously seen by chemists.

The researchers believe that understanding the production of these nepetalactones could help them recreate the way that plants synthesise other chemicals like vinblastine, which is used for chemotherapy. This could lead to the ability to create these useful medicines more efficiently and quickly than we are currently able to harvest them from nature.

Usually in plants, for example peppermint, terpenes are formed by a single enzyme. In their paper; ‘Uncoupled activation and cyclization in catmint reductive terpenoid biosynthes‘ published  in Nature Chemical Biology, the researchers report that in catnip terpenes are formed in a two-step process; an enzyme activates a precursor compound which is then grabbed by a second enzyme to produce the substance of interest.

This two-step process has previously never been observed, and the researchers also expect something similar is occurring in the synthesis of anti-cancer drugs vincristine and vinblastine from Madagascan periwinkle, Catharanthus roseus, and elsewhere in olive and snapdragon.

In the publication, the team describe the process by which catmint produces nepetalactone in microscopic glands on the underside of its leaves. The study also identifies three new enzymes with unusual activity.

Dr Benjamin Lichman, who conducted the work while a post-doc at John Innes Centre and who is now a lecturer at the University of York, says: “We have made significant progress in understanding how catnip makes nepetalactones, the chemicals that sends cats crazy. Catnip is performing unusual and unique chemical processes, and we plan to use these to help us create useful compounds that can be used in treatment of diseases such as cancer. We are also working to understand the evolution of catnip to understand how it came to produce the cat-active chemicals.”

Professor Sarah O’Connor, project leader at the John Innes Centre, says: “Nepetalactones have potential use in agriculture as they participate in certain plant-insect interactions. In future work we will explore the roles that these compounds have in plants.”