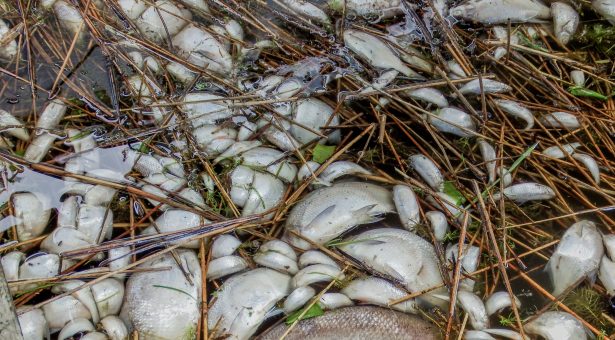 Millions of fish-deaths caused by toxic Prymnesium algal blooms could be prevented with the application of a household chemical best known for bleaching hair, breakthrough research has revealed.

Trials carried out in the Norfolk and Suffolk Broads National Park have shown that at controlled concentrations hydrogen peroxide (H2O2) is deadly to Prymnesium parvum, the golden algae.

The discovery follows research led by a team of scientists at the John Innes Centre and the University of East Anglia, aimed at finding a cost-effective solution to a persistent problem that threatens the £100m angling economy of the Broads.

In 2015, following an outbreak of toxic Prymnesium blooms, the Environment Agency supported by angling clubs, rescued almost three quarters of a million fish from Hickling Broad and Somerton. The fish were released back into safer parts of the River Thurne, Norfolk, over the course of six weeks in one of the largest rescues of its kind. The operation cost just under £40,000 and involved 561 hours of staff time.

Major rescue operations of this sort are on the verge of becoming a thing of the past following successful trials at Whispering Reeds Boatyard on Hickling Broad. “We wanted to come up with an easy, cheap chemical treatment so that when the Prymnesium bloom does happen there’s a way to control it that prevents fish deaths,” explained Ben Wagstaff, PhD student at the John Innes Centre who took part in the trials.

“Our lab and literature research came up with hydrogen peroxide as a potential chemical treatment. We developed a system in the lab where you could use low enough concentrations that would kill algae but wouldn’t affect any fish or macro invertebrates. Then we took our lab understanding and sprayed a very small section of a broad which had been affected by blooms and it worked brilliantly.”

He added: “We are really grateful to Norfolk Wildlife Trust and Whispering Reeds Boatyard for their help to facilitate this exciting work”.

Prymnesium, unlike other algae, does not produce obviously visible blooms; the first indication is often the death of fish or large masses of fish frantically trying to escape the source of toxicity.

Blooms happen regularly in slightly salty or brackish waters such as the coastal parts Norfolk and Suffolk Broads, although not all of them are deadly. Under certain environmental conditions still being researched, Prymnesium can produce toxins, very quickly turning water toxic for fish within a matter of days, sometimes even hours.

Previous research by the John Innes Centre team revealed the existence of a virus which is believed to cause Prymnesium to release toxins into the water.

The research was hailed as a “life-saver” by John Currie General Secretary of the Pike Angling Club of Great Britain: “It’s hard to put into words how important this is for us. Thanks to this research from the John Innes Centre we can save fish rather than observe them dying.”

“At one time before the first Prymnesium wipe out in 1969 this area had the British pike record, so was one of the most important pike fisheries in Europe. With this success we hope that in the next six years we will see growth rates coming back to pre-1969 levels, that’s completely feasible.”

He added: “In 2015, during the Prymnesium incident we had over a million fish in a small area. If we were in that situation again we would be able to use hydrogen peroxide…so it’s a life-saver.”

Hydrogen peroxide is already used by the Environment Agency during pollution incidents to raise oxygen levels for fish and stop them from effectively suffocating. Peroxide can also help where large numbers of fish can become trapped in small areas of water and need extra aeration to help them survive. It is extremely effective – much more effective than other aeration methods.  Only slightly higher doses are needed to go from being useful for water aeration to being a safe chemical to kill off Prymnesium and, after a short period, it breaks down into water and oxygen which makes it very safe when applied.

The versatile chemical compound is perhaps best known as a hair bleaching agent. It also has a string of other useful functions such as an antiseptic mouthwash, teeth-whitener, acne treatment, stain-remover and laundry whitener.

The John Innes Centre/University of East Anglia team tested a range of concentrations – working out that the optimum levels to kill the Prymnesium while remaining harmless to fish and other wildlife.

The team believe that preventatively treating localised areas with hydrogen peroxide could help create safe refuges during periods in which a build-up of Prymnesium threatens a toxic bloom.

Jamie Fairfull, Senior Environmental Officer for the Environment Agency said: “Prymnesium is one of the biggest risks to the fish population in the Broads. Being able to use hydrogen peroxide is a major breakthrough because for us the current options are so labour intensive. The Environment Agency usually recharges polluters for the cost of dealing with pollution incidents – but with Prymnesium of course there is no-one to invoice.”

Prymnesium, when stressed is able to produce a toxin that kills off its competition as well as fish, but the tests showed that the peroxide completely broke the Prymnesium and its toxin down without adverse effects.

Follow up trials, said Mr. Fairfull, are necessary for us to fully understand how the peroxide mixes and disperses so that it can be used effectively and safely.  It will then be used and implemented along with a range of other methods in combating Prymnesium.

“This will allow us to protect the fish population for the benefit of the environment, anglers and the economy of Norfolk,” he added.

Andrea Kelly, Senior Ecologist for the Broads Authority said: “This research has given us a new way to protect fish stocks and angling in the Broads and we continue to support the John Innes Centre and the University of East Anglia in developing knowledge for managing the fishery of the National Park. Although Prymnesium only occurs in a small area, the Broadland rivers are connected and what effects fish in one area of the Broads impacts on the whole system.”