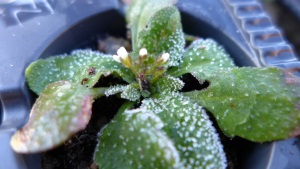 A new study has uncovered multiple factors that contribute to the important phenomenon of vernalization in plants.

The John Innes Centre researchers carried out field experiments in Norwich and Sweden to investigate how plants interpret and act on varying temperature signals to accurately align their flowering with spring, a process called ‘vernalization’.

The results are outlined in a paper published in the journal Nature Communications, in which the authors warn of “deleterious consequences” for vernalization in the face of a more variable global climate.

In Arabidopsis, vernalization involves the epigenetic silencing of a gene called FLOWERING LOCUS C (FLC) in response to winter. FLC acts like a brake to flowering: by silencing FLC, flowering is induced.

Epigenetic changes to gene expression are effects that are heritable through cell division, but that do not change the DNA sequence, and these are sometimes triggered by environmental factors.

Under controlled conditions in the laboratory vernalization can occur at constant temperatures between 0 and 15 °C. But real winter temperatures are not constant, and daily fluctuations outside between day and night often exceed the difference in seasonal average temperatures.

Experiments to date indicate that plants are able to extract a reliable signal from such “noisy” and variable temperature profiles. But how they integrate these signals over timescales of many weeks to judge the passing of winter has not been clear.

Previous analyses have developed cumulative measures of cold exposure over time, including photothermal units or ‘degree days’, used to plan the harvest dates of crops.

The molecular mechanisms underlying these measures are unknown. However, studies have shown that silencing of FLC in response to winter requires the induction of a cold-induced protein called VERNALIZATION INSENSITIVE3 (VIN3).

This study, carried out by the teams of Professor Caroline Dean and Professor Martin Howard, finds that as winter continues, expression of VERNALIZATION INSENSITIVE 3 (VIN3), is upregulated by at least two independent thermosensory processes. One integrates long-term cold temperatures, while the other requires the absence of daily temperatures above 15 °C.

The key factor, the study reveals, is that the lack of spikes of high temperature (above 15 °C) not just prolonged cold, is the major driver for vernalization.

The findings have implications due to an increasingly unpredictable climate. The study concludes: “Monitoring of peak daily temperature [by plants] is an effective mechanism to judge seasonal progression, but is likely to have deleterious consequences for vernalization as the climate becomes more variable.”