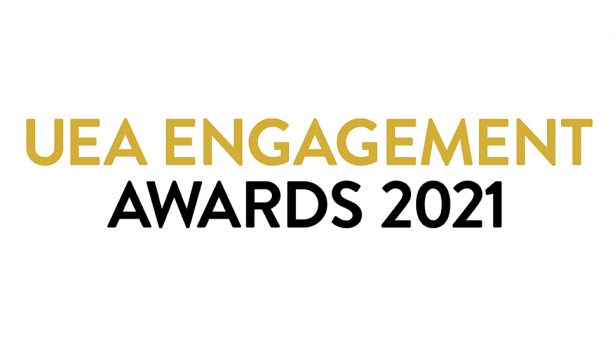 We were delighted this week to learn that three John Innes Centre colleagues have won UEA Engagement Awards.

Ruby O’Grady, a member of our Communications and Engagement team, alongside PhD students James Canham and Danny Ward won the awards which celebrate and recognise public engagement by students, staff, academics and departments from UEA and the Norwich Research Park.

For example, Ruby worked with our researchers to produce an animation about gene-editing in crops which coincided with the DEFRA consultation on gene-editing and was chosen by the Food Standards Agency and IPSOS Mori to use in gathering consumer views on genome editing. The award also acknowledged her work to initiate and manage external collaborations.

“It was a surprise to be nominated, let alone receive this recognition by UEA. I feel very lucky to work in such a supportive, vibrant and stimulating environment in the Communications and Engagement team at the John Innes Centre and with colleagues across the Norwich Research Park” noted Ruby.

“It’s been great to have the opportunity to work forge such exciting collaborations in Norwich, with Norwich University of the Arts, and beyond with Science Gallery Bengaluru in India”.

James Canham was selected in recognition of his efforts to engage with a broad audience. The judging panel making specific reference to his work in sub-Saharan Africa where James has engaged with policy makers, farmers, scientists and other stakeholders in trying to combat emerging crop diseases which threaten the food security and wellbeing of millions in countries often lacking the capacity to mitigate against the damage caused.

James said of his award, “During my PhD, I have endeavoured to communicate the scientific research that I’m passionate about to a broad audience. I did this, not only to try to help inspire others and aid understanding but also to improve my own skills in communication. The journey has been immensely rewarding. I couldn’t have won the award without the participation and support of others and so the award is a recognition of their amazing contributions over the last few years.”

Fellow PhD student Danny Ward was recognised for the variety science communication, outreach and public engagement work he has done during his studies, with the panel in particular noting his work throughout the COVID-19 pandemic; “[Danny is] clearly a prolific science communicator with clear and sustained projects”.

Highlights of Danny’s ongoing commitment to science communication include his year-long #52Species Twitter initiative, work with the Norwich Science Festival, as well as a podcast ‘Research in Plain English’ which he launched recently.

“I am delighted to be a recipient of this award. It’s a nice celebration of the engagement work I have been able to carry out, especially given that I was essentially brand new to public-facing science communication and outreach when I first started here at the John Innes Centre and UEA. Hopefully, it may inspire some of the newer PhD students to give similar such projects and initiatives a go in future” said Danny.

Congratulations to all three.