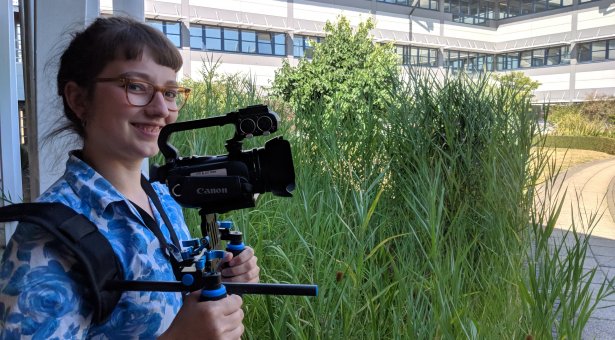 Last week we were delighted to welcome Ruby O’Grady to our Communications and Engagement team.

Ruby joins us as a Communications Officer, specialising in digital and print media, particularly video production and editing.

Hello Ruby, first question; who are you and what do you do?

I’m Ruby and have just started as the new Communications Officer.

I’ll be helping to spread the word about all the amazing and inspiring discoveries made about plants by designing posters, making videos, helping put together the Advances magazine and lots of other exciting things… I think.

What did you do before joining the John Innes Centre?

I finished my degree studying Biology at Oxford University just over a year ago.

Before joining the John Innes Centre I was working in the lab as a Predoctoral Intern in the Krasileva Group at The Sainsbury Laboratory, which is also on the Norwich Research Park, where I was investigating the role of genes that the group had previously identified through bioinformatic analysis as appearing to play a role in plant immunity and as being conserved across all land plants. This suggested they could be important in engineering disease resistance across diverse plants. I was testing what happened when you infect diseases into plants lacking these candidate genes to see if they did have a role as predicted.

At the same time, I was also working at the Norwich Arts Centre bar at weekends, so you may have seen me pulling pints if you’ve been to a gig there recently.

What attracted you to SciComms?

I’ve always been really interested in science, in particular plant science but also other things such as graphic design, photography and filmmaking.

Alongside studying for my biology degree, I filled my time doing lots of other side projects in these areas for example making documentaries on education in Scandinavia or squats in Slovenia. You can see a full portfolio of my work on my website. As I approached the end of my degree realised that going into SciComms could combine all my interests together.

I also really enjoy talking to people without a science background about things going on in the science world and that made me think maybe it would be something that suits me.

What stories or research areas are you most looking forward to covering?

I like the idea of covering the more molecular based stories and making them as accessible as possible.

I think that these are often the most challenging to communicate in an engaging way yet can have far reaching implications, whether it be on other areas of science or food security.

Our YouTube channel currently has a largely male audience, why do you think that is and is it something you are going to look to address?

I think it could reflect the gender imbalance that we see across STEM.

Hopefully by showing how science is for everyone if they want it to be, as well as making videos as engaging as possible things will balance out a bit more.