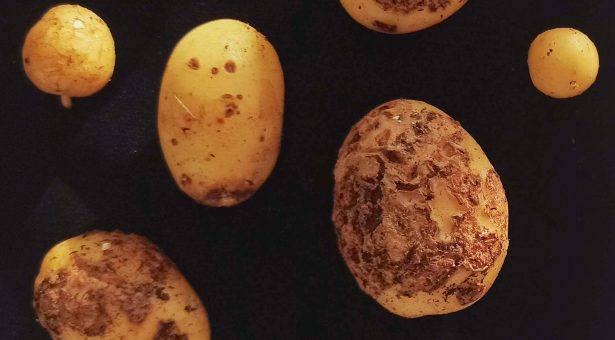 An innovative method of controlling a range of damaging crop diseases using native, beneficial soil bacteria has emerged from a research-industry collaboration.

The agri-tech innovation hopes to give farmers a way to reduce the cost and environmental damage caused by the chemical treatments currently in use to control crop diseases.

The John Innes Centre team isolated and tested hundreds of strains of Pseudomonas bacteria from the soil of a commercial potato field, and then sequenced the genomes of 69 of these strains.

By comparing the genomes of those strains shown to suppress pathogen activity with those that did not, the team were able to identify a key mechanism in some of the strains that protected the potato crop from harmful disease-causing bacteria.

Then using a combination of chemistry, genetics and plant infection experiments they showed that the production of small molecules called cyclic lipopeptides is important to the control of potato scab, a bacterial disease that causes major losses to potato harvests.

These small molecules have an antibacterial effect on the pathogenic bacteria that cause potato scab, and they help the protective Pseudomonas move around and colonise the plant roots.

The experiments also showed that irrigation causes substantial changes to the genetically diverse Pseudomonas population in the soil.

First author of the study Dr Alba Pacheco-Moreno said, “By identifying and validating mechanisms of potato pathogen suppression we hope that our study will accelerate the development of biological control agents to reduce the application of chemical treatments which are ecologically damaging.

“The approach we describe should be applicable to a wide range of plant diseases because it is based on understanding the mechanisms of action that are important for biological control agents,” she added.

The study, which appears in eLife, proposes a method by which researchers can screen the microbiome of virtually any crop site, and take into account varying soil, agronomic and environmental conditions.

By exploiting advances in high-speed genetic sequencing, the method can screen the soil microbiome for therapeutic bacteria and work out which molecules are being produced to suppress pathogenic bacteria.

They can also show how these beneficial bugs are affected by agronomic factors such as soil type and irrigation.

The next step for the new approach is to put the beneficial bugs back into the same field in greater numbers or in cocktails of mixed strains as a soil microbiome boosting treatment.

Dr Jacob Malone, Group Leader at the John Innes centre and co-corresponding author of the study explains the benefits, “The massive advantage of this approach is that we are using bacterial strains that are taken from the environment and put back in the same specific biological context in larger numbers so there is no ecological damage”.

Potential methods to apply the microbiome boosters include applying the bacterial cocktails as seed coatings, as a spray or via drip irrigation.

Dr Andrew Truman, Group Leader at the John Innes Centre, and corresponding author of the study tells us about the long-term vision for this method, “In the future  it’s not the molecule produced by the bacteria that we would use, it would be the Pseudomonas strain itself. It offers a more sustainable route – we know these bacteria colonize the soil where potatoes grow, and they provide protection to the crop. Using a bacterium, you can easily grow and formulate it in an appropriate way and apply it to the field, and it is much greener than using a synthetic chemical.”

Pseudomonas bacteria are commonly associated with plants and have been widely studied as biological control agents, as they secrete natural products which promote plant growth and suppress pathogens. However, their use in the past has been hampered by inconsistency.

Previous studies on the suppression of potato scab have indicated a potential biocontrol role for Pseudomonas. However, progress was hampered by a lack of mechanistic knowledge. It was also widely known that irrigation can suppress Streptomyces scabies infection and now this study suggests that this is because of the effect that water has on microbial populations.