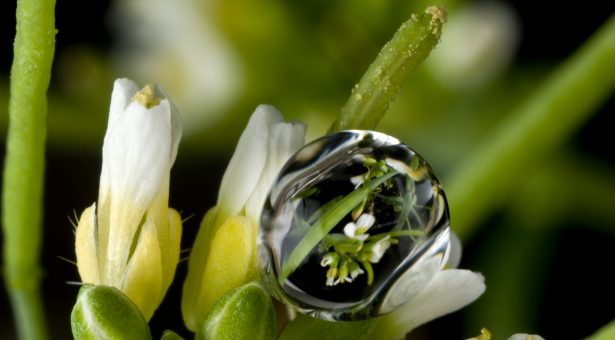 Arabidopsis thaliana, or thale cress as it is commonly known, made history back in 2000 by becoming the first plant to have its entire genetic code read by scientists, contributing to what is often referred to as biology’s version of the book of life.

Today, the ‘microscopes’ scientists have access to allow them to zoom down much further into the structure of the proteins that are made by the genes, so taking the book of life and making sense of the tiny letters on the pages.

In an unusual combination, state-of-the-art experimental facilities and thale cress, a humble weed, are at the centre of research that sheds light on how plants behave when they are under attack from disease-producing pathogens.

The study also represents the 1,000th new protein structure to be solved using the intense X-rays at Diamond.

Scientists from the Sainsbury Laboratory and the John Innes Centre on the Norwich Research Park, who are studying the ‘molecular warfare’ that occurs when plants find themselves under attack from disease-producing pathogens, have used the synchrotron’s powerful structural biology capabilities to investigate the interplay between thale cress and the bacteria Pseudomonas syringae, a well-known plant-pathogen ‘model’ system.

Certain strains of P. syringae can also cause diseases like bacterial speck or canker in important crop species such as tomato.

The researchers uncovered the three-dimensional crystal structure of an active part of the effector protein ‘AvrRps4’ and used this to investigate protein activity. Certain strains of P. syringae directly inject AvrRps4 into plant cells, presumably to undermine host defences.

Its crystal structure was solved at Diamond and additional mutagenesis studies helped to deliver previously unknown aspects of AvrRps4 function.

These results, published in the Proceedings of the National Academy of Sciences (PNAS) add further details to the unsolved problem of how intracellular plant immune receptors activate defence upon effector detection.

A thorough understanding, at the molecular level, of how these plant defence pathways are activated in response to pathogens is an important step towards delivering sustainable disease resistance in important crop species such as tomato and potato.

Dr Mark Banfield, from the Department of Biological Chemistry at the John Innes Centre, explains why thale cress, the meekest of weeds, is so ideal for research,“Thale cress grows very fast and has a relatively tiny genome. Working in this model system allowed us to rapidly interpret our structural studies with respect to the outcome of recognition in the plant, which results in cell death, tissue collapse and disease resistance.”

Looking ahead, Dr Banfield adds, “A long-term aim of our research projects is to use our molecular analyses to inform novel approaches to engineering plant disease resistance in important crop species of relevance to global food security.

Our structural work on AvrRps4 and the consequent insights into the regions important for activation of plant immunity are a small step in this direction.”

Professor Dave Stuart, Life Sciences Director at Diamond Light Sources adds, “It is very fitting that the 1000th protein structure identified at Diamond has such a strong connection back to genome discoveries made at the start of the new millennium.

Since 2007, the life science experimental stations (known as beamlines) at Diamond have been rapidly accelerating the pace of discovery in structural biology, building on the vast body of knowledge from the genome project.”

“The structures solved at Diamond to date cover a wide range of human and plant health research fields such as cancer, HIV, improved antibiotics and, as in this study, global food security. The fact that we have doubled the number of structures solved in just 18 months shows how well our beamlines are delivering for structural biology researchers in the UK and beyond. Congratulations to the Norwich groups on their important results and to the scientists and technical staff at Diamond who have worked extremely hard to make the crystallography beamlines so productive.”

The precision of the light produced by a synchrotron makes it an extremely powerful tool for scientists.

In the case of this research, diffraction quality protein crystals are often the result of months of painstaking preparative work, and any follow-up work based on the structure can also take months, or years to complete.

It is critical to collect the very best data from protein crystals, to ensure the protein models produced are as accurate as possible. Diamond allows researchers to do this.

Also, unlike X-ray diffraction equipment in Universities and research institutes, synchrotron light can be ‘tuned’ to deliver different wavelengths of X-rays onto crystals. This was critical to the success of this project, enabling electron density maps to be rapidly produced. The scientists could not have done this with such speed and accuracy without access to a synchrotron.