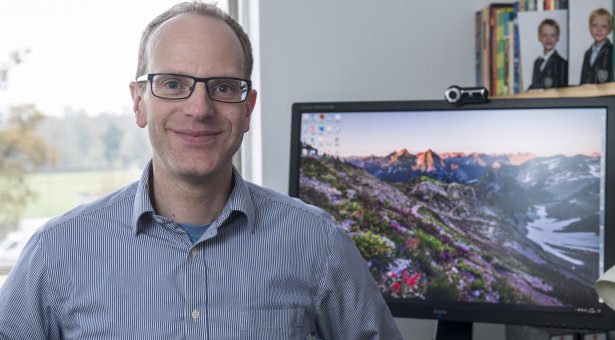 Professor Martin Howard has been awarded the 2022 Institute of Physics Rosalind Franklin Medal.

More broadly, over the past 15 years, Professor Howard has introduced physics-based thinking to a wide community of biologists.

Professor Howard, a group leader at the John Innes Centre commented: “It’s a tremendous honour to be awarded the Rosalind Franklin medal from the Institute of Physics, recognising interdisciplinary science at the interface between physics and biology.

“Most of all I’d like to thank the incredibly talented students and postdocs who made it all possible. The collaborative nature of science at the John Innes Centre has also been a critical component and I’d like to thank all the groups I’ve worked with here, particularly those led by Caroline Dean, Alison Smith, Mark Buttner, Peter Shaw, Graham Moore, Daniel Zilberman and Chris Morgan.”

Professor Howard’s achievements recognised by the Institute of Physics include:

The Institute of Physics (IOP) is the professional body and learned society for physics, and the leading body for practising physicists, in the UK and Ireland.

Its annual awards proudly reflect the wide variety of people, places, organisations and achievements that make physics such an exciting discipline.

They also recognise and celebrate companies which are successful in the application of physics and innovation, as well as employers who demonstrate their commitment and contribution to scientific and engineering apprenticeship schemes.

“On behalf of the Institute of Physics, I warmly congratulate all of this year’s Award winners.

“Each and every one of them has made a significant and positive impact in their profession, whether as a researcher, teacher, industrialist, technician, or apprentice.

“Recent events have underlined the absolute necessity to encourage and reward our scientists and those who teach and encourage future generations. We rely on their dedication and innovation to improve many aspects of the lives of individuals and of our wider society.”