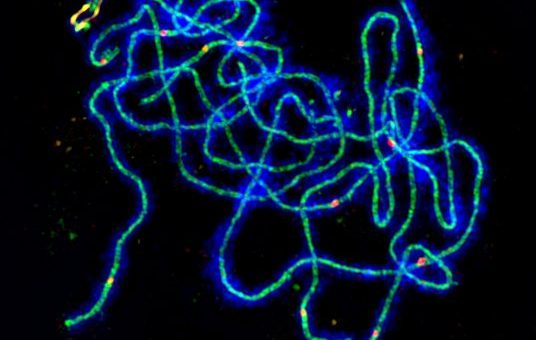 A new discovery explains what determines the number and position of genetic exchanges that occur in sex cells, such as pollen and eggs in plants, or sperm and eggs in humans.

When sex cells are produced by a special cell division called meiosis, chromosomes exchange large segments of DNA. This ensures that each new cell has a unique genetic makeup and explains why, with the exception of identical twins, no two siblings are ever completely genetically alike.

These exchanges of DNA, or crossovers, are essential for generating genetic diversity, the driving force for evolution, and their frequency and position along chromosomes are tightly controlled.

Despite over a century of research, the cellular mechanism that determines where, and how many, crossovers form has remained mostly mysterious, a puzzle that has fascinated and frustrated many eminent scientists. The phrase “crossover interference” was coined in 1915 and describes the observation that when a crossover occurs at one location on a chromosome, it inhibits the formation of crossovers nearby.

Using a cutting-edge combination of mathematical modelling and ‘3D-SIM’ super-resolution microscopy, a team of John Innes Centre researchers have solved this century old mystery by identifying a mechanism which ensures that crossover numbers and positions are ‘just right’: not too many, not too few and not too close together.

The team studied the behaviour of a protein called HEI10 which plays an integral role in crossover formation in meiosis. Super-resolution microscopy revealed that HEI10 proteins cluster along chromosomes, initially forming lots of small groups.

However, as time passes, the HEI10 proteins concentrate in only a small number of much larger clusters which, once they reach a critical mass, can trigger crossover formation.

These measurements were then compared against a mathematical model which simulates this clustering, based on diffusion of the HEI10 molecules and simple rules for their clustering. The mathematical model was capable of explaining and predicting many experimental observations, including that crossover frequency could be reliably modified by simply altering the amount HEI10.

Co-first author Dr John Fozard explains: “Our study shows that data from super-resolution images of Arabidopsis reproductive cells is consistent with a mathematical ‘diffusion-mediated coarsening’ model for crossover patterning in Arabidopsis. The model helps us understand the patterning of crossovers along meiotic chromosomes.”

Corresponding author, Professor Martin Howard, adds: “This work is a great example of interdisciplinary research, where cutting-edge experiments and mathematical modelling were both needed to unlock the heart of the mechanism. One exciting future avenue will be to assess whether our model can successfully explain crossover patterning in other diverse organisms.”

This research will be particularly valuable for cereal crops, such as wheat, in which crossovers are mostly restricted to specific regions of the chromosomes, preventing the full genetic potential of these plants from being available to plant breeders.

The image at the top of the page shows an Arabidopsis meiotic cell imaged using super-resolution microscopy showing DNA in blue and the proteins HEI10 in red, ZYP1 in green and ASY1 in yellow.