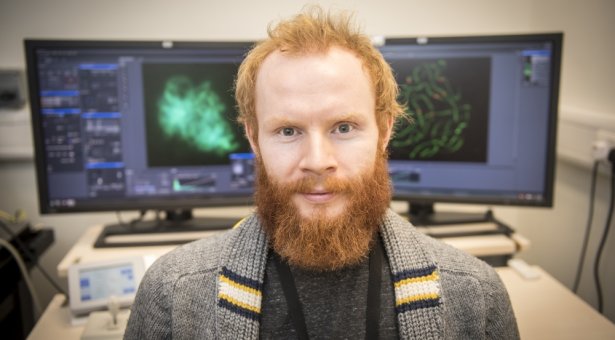 Dr Chris Morgan is a Postdoctoral Scientist working in Kirsten Bomblies’ lab in the Cell and Developmental Biology Department.

We chatted to him about his life and work.

What do you study in your research?

We are trying to understand how a type of cell division, called meiosis, has evolved in the polyploid plant Arabidopsis arenosa.

Meiosis produces the cells required for sexual reproduction (pollen and eggs in plants) and this process encounters many challenges in polyploid species that possess more than two copies of each chromosome.

Polyploids are common in the plant kingdom but less so in other organisms such as animals, which tend only to have two copies of each chromosome (diploids).

I’m the cytology guy in my group (which means I like sitting in dark rooms looking at cells down a microscope) and over the years I’ve been honing my skills at trying to look at meiosis in different plants.

Often, chromosomes will come together as threes or fours, which confuses the cell, and as it tries to pull the chromosomes apart you can get 3 chromosomes going in one direction and 1 going in the other. The outcome is that gametes will have the wrong number of chromosomes and won’t work properly, reducing fertility.

We’re trying to figure out how polyploid Arabisopsis arenosa has evolved to overcome these challenges in meiosis to maintain high levels of fertility within its populations.

I used to work on another model plant species, Arabidopsis thaliana, and now I’ve specialised on its close relative Arabisopsis arenosa.

Studying meiosis in A. arenosa is in some ways easier and some ways more difficult than A. thaliana. In A. thaliana the flowers buds are smaller and dissecting tiny anthers (the part of a flower containing the pollen) from the closed flower buds is a bit fiddly. I use ultrafine watchmaker’s forceps – not to be done after a double expresso.

In A. arenosa the buds are a bit bigger and you have more cells per anther so generally you’ll get more cells on a slide, but the downside is that they’ve got more chromosomes per cell so actually untangling the chromosomes can be a bit difficult. This is because in the early stages of meiosis chromosomes are organized into long threads that are packed together like a ball of string.

That’s why it’s really useful to use a ‘super-resolution’ microscope we have at the John Innes Centre called a Zeiss ELYRA. The ELYRA microscope uses clever physics to bypass what was previously thought to be the ‘theoretical’ resolution limits of a light microscope, meaning we can get extremely high resolution 3D images of each cell and tease out individual chromosomal threads from the ball of string to understand how chromosomes interact and exchange bits of DNA during polyploid meiosis.

There’s not many super resolution microscopes in the country and we wouldn’t be able to do what we do without it.

What brought you to the John Innes Centre?

Science is just one of those things that I’ve sort of fallen into.

I studied Biochemistry for my undergrad at the University of Oxford and in my fourth year I did a placement with Prof. Hugh Dickinson which got me interested in plants. We started a collaboration with Prof. Chris Franklin at Birmingham University and this collaboration led to me going to Birmingham to do a PhD in the Franklin group.

While I was working with Chris Franklin we started collaborating with Kirsten Bomblies, who was in Harvard at the time. A lot of the genes she identified through her population genetics research were genes that we had worked on previously. Then fortuitously Kirsten moved to the John Innes Centre just before I was thinking of doing a postdoc so I came here too.

After starting a PhD I decided an academic career is for me. Before that I didn’t really have any solid plans at all of what I wanted to do, I thought I’d just go with the flow. I was even toying with being an accountant for a while.

I remember my first taste of a ‘real’ research environment was a lot more fun than I expected in comparison to my experience in undergraduate practical experiments; I didn’t really see the point of them because you knew what was going to happen.

When you start doing your own research, you’re trying to answer a question that nobody knows the answer to. That’s the best bit about science, finding out things that people have never known or thought about before.

I really like Norwich, and the John Innes Centre is a fantastic place to work, not only because of the great research facilities but also because of the friendly, supportive and highly collaborative working environment. There are also a few other perks, including a staff swimming pool (I’m going swimming this evening to make the most of the pool before it closes for winter) and a boat called Goose, which staff can hire and take for a spin on the broads.

You’ve made several videos about the science you do and science more generally. What got you interested in communicating your science to a wider audience?

The communications stuff started during my PhD. I got into doing public engagement and showing off stuff on the internet because at the University of Birmingham they have an internal competition called 3-minute thesis.

It’s challenging but also important – a bit like an elevator pitch – being able to explain your research to a lay person in 3 minutes and to make it understandable. So I entered that, won, and thought it was fun.

I also did a public engagement course during my postgrad, during which I got in touch with the Birmingham ThinkTank science museum.

I ended up doing quite a few “meet the scientists” days there and on one occasion we went during half term when it was raining and unbelievably busy. It was probably the most tiring thing I’ve ever had to do. We talked to about 2,000 visitors. I was extracting DNA from strawberries and I think we got through about 8 punnets.

I won a biochemical society award for my CRISPR-Cas video which you can find on YouTube.

I have made about 9 or 10 YouTube videos, mostly about meiosis, and have also participated in an outreach project with the University of Birmingham aimed at A-level Biology students. This involved some podcasts and videos to demonstrate how some of the practical skills they learn are still actually used in proper research settings.

Is it difficult to find time do outreach and communication work around you research?

I do find it more of a challenge to find time as a postdoc than I did as PhD student because I think there’s more pressure to be getting results and papers. When you’re a PhD student there are more opportunities and competitions for outreach and comms things which fit around what you have to achieve.

I believe that public engagement is vital and I want to put it further up my priority list. There will always be other things that may seem more urgent but you can’t scrimp on it.

Do you think it is important for scientists to be involved in outreach and communicating to a larger audience?

Outreach is good for all sorts of reasons.

Obviously, most of us are funded by the taxpayer in some way or another and so it’s kind of a duty to explain how and why we’re spending their money in interesting and worthy ways. Also, it’s fun and a useful team building exercise for a lab, especially when you take the whole lab out to a science museum or a school.

It’s always good to remember that public engagement is a two-way learning process, especially at a place like the John Innes Centre where we’re working on things like genetic modification (GM), which might be seen as a contentious subject.

In my experience, however, when I’ve been out and talked to people about GM most people are fine with it, especially after you’ve explained it.

I think the tide seems to be turning in terms of public opinion of GM and this is in part down to good public engagement from scientists, so for me that’s another key reason to keep doing it.

I’ve also learned a lot from interacting with the public and it’s developed my own understanding of science and research. For instance, when participating in one public engagement event I discovered the best one-word definition for DNA I’ve ever heard. It was from a 6-year old. I asked ‘Do you know what DNA is?’. Her answer, “Information”. Mind blowing.