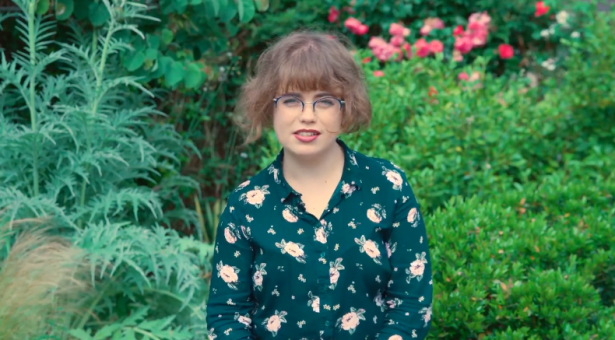 Harriet Gooch has won the Andrew Miller Policy competition for a policy briefing she wrote on the topic of genetically-modified (GM) bacteria.

The award comes from the Society for Applied Microbiology and is named after Andrew Miller, former MP and first ever elected Chair of the House of Commons Science and Technology Select Committee, who was pivotal in bridging the gap between science and UK policy both within the society and government.

The competition invited microbiologists to write a mini two page policy brief on a microbiology topic of their choice, in the style of those used by the Parliamentary Office of Science and Technology to brief MPs and Peers with accessible, unbiased information.

“It was a nice surprise to find out that I’d won the competition. It’s nice to be recognised and also get the £300 prize”, says Harriet.

Harriet’s research project in the Tony Maxwell Group focusses on developing the larvae of the moth Galleria mellonella as a model for the infant gut microbiome, in collaboration with the Hall Lab at the Quadram Institute.

“There were topics I considered for the policy briefing which were more related to my PhD project but I think it is really interesting to think about how GM bacteria could be useful because we’ve spent a lot of time developing them but there’s still lots of limitations on how you can use them.”

“Genetically modified bacteria are currently used in labs and in industry to do research and produce medicines but aren’t allowed be released into the environment because of UK and EU rules which were made 20 years ago. But in the last 20 years we’ve made a lot of progress..”

“There’s a lot of potential uses in agriculture and human health. They can be useful agriculture, to give crops more nutrition and protect them from pests. We can use them in medicine because we’ve recently started understanding how bacteria can be beneficial to our health and so we can start using bacteria to maybe deliver drugs or enhance nutrition in humans. There are even bacteria being developed to treat cancer and diabetes.”

“But there are also things to consider and concerns people might have. It’s definitely a complex issue with lots of perspectives.”

This was the first time Harriet had written for policy audience, “It was a challenge to make it something that everyone could understand whilst also getting across the scientific concepts and at the same time remaining impartial.”

Following on from success in the competition and looking ahead, Harriet reflects, “I’m interested in policy as a possible career. I like thinking about scientific concepts in terms of their wider impact and how we can take all these scientific discoveries we’ve made and make them actually useful to people.”

“I was delighted to hear that Harriet had won this prize for her policy briefing. It is important to have a clear flow of scientific evidence between scientists and Government, and I’m pleased to see Harriet engaging in this area at this stage in her career. By actively participating in the policy making process, our researchers can help ensure that our research discoveries deliver impact and that policy decisions are informed by scientific evidence.”