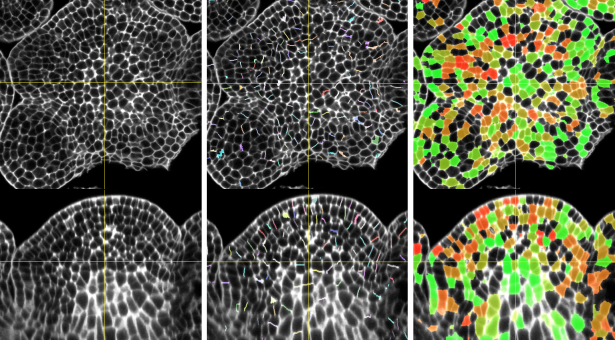 This new development has made it possible to explore further below the outer surface of plants and has uncovered how a key gene controls stem growth.

The limitations of current live-imaging techniques mean typically only easily accessible parts of plants can be accurately visualised.

Studies on areas such as leaves and flowers, have therefore often taken centre stage in plant developmental research.

The cellular origins of plant stem growth are buried under several layers of other cells, and as a consequence, it has previously been difficult to explore how stem growth is controlled.

To address this oversight, Professor Robert Sablowski and his team from the John Innes Centre developed new cell imaging techniques to allow them to visualise changes in cells below the plant surface.

In particular the group focussed on the shoot apical meristem (SAM), a cluster of cells at the shoot tip, which differentiate to form different kinds of plant tissues and determine the size and overall shape of the plant. The research is published in a new paper in the scientific journal ‘Developmental Cell’.

Professor Sablowski said: “To understand how genes control plant shape, we need to understand how they affect growth and division of the cells that make up the plant. The cells that go on to form stem tissue are located in a part of the SAM called the ‘rib zone’, which is buried underneath layers of cells all doing other things.”

“The two main methods that scientists usually use to look at cells under a microscope weren’t suitable in this case: live imaging reveals how cells grow and divide over time, but the rib zone is too deep to give clear live images. The other method is to slice through the SAM to see the rib zone cells. However, you can’t do that with living, growing cells, so the resulting data is not in ‘real-time’. To make things worse, the rib zone is not clearly demarcated, so it’s hard to differentiate it from the rest of the SAM.”

To get around these problems, the scientists combined two approaches. First, using normal ‘wild-type’ Arabidopsis thaliana plants, they marked single cells with a bright fluorescent marker and followed the descendants of these cells in the rib meristem.

In the second approach, the researchers used information recorded in the cell walls to infer how the rib zone grows: thinner walls produced during recent cell divisions glowed less brightly than older, thicker cell walls, and the orientation of new cell walls in three-dimensional images revealed the directions of cell growth and division.

Next, the researchers repeated this experiment, but used SAM tissues from a mutant Arabidopsis plant lacking a gene called REPLUMLESS, or RPL for short, to see what effect this had on cell growth.

“It was already known that RPL must be involved in stem development, because it is expressed throughout the SAM, including in the rib zone, and mutation of this gene results in short stems – we just didn’t know how, until now,” said Dr Stefano Bencivenga, first author of the paper. “This time, in the images of SAMs from the rpl mutant, we noticed that although the cells grew at the same rate, they were arranged at different angles instead of all neatly facing in the same direction.”

Professor Sablowski said: “This showed us that RPL doesn’t affect the speed or number of cells growing in the rib zone, rather it affects the orientation in which cells divide as they form new plant stem tissue.”

“In other experiments, also described in our paper, we demonstrate that RPL represses other genes involved in creating organ boundaries. This is important because these organ boundary genes are known to reduce growth in the regions that separate the SAM from new organs such as leaves and flowers. As well as being an important advancement in our understanding of stem development, we might be able to use this knowledge to influence plant traits with key practical importance.”

This research was funded by the Biotechnology and Biological Sciences Research Council (BBSRC).