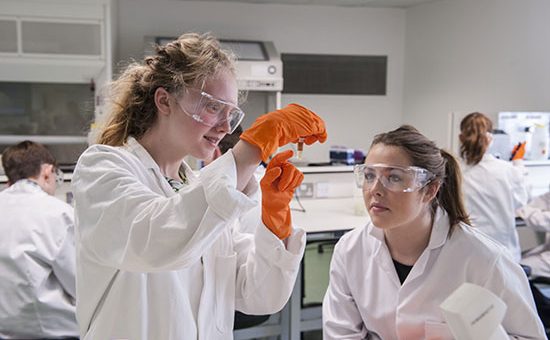 A poisonous species of mushroom new to Norfolk has been identified by Year 10 Science Camp students at the John Innes Centre, using advanced genetic analysis techniques.

Now the work of the 14-year-olds has been published in the scientific research journal Field Mycology.

“It is most unusual for schoolchildren to contribute to a publication in a scientific journal such as this,” says Anne Edwards, Research Scientist who worked with the Year 10 students. “It is a tremendous achievement and is indicative of how rewarding work experience in the labs at the John Innes Centre can be.”

The mushrooms were growing in the back garden of a couple from Cley in North Norfolk. The fungus appeared to be a common field mushroom, but the couple suffered mild poisoning symptoms after eating them.

Their GP advised them to contact mycologist Tony Leech in Holt as an expert who could find out which poisonous mushroom they had eaten.

Leech suspected the mushroom to be one of the yellow-staining varieties often mistaken for edible field mushrooms, so called for turning canary yellow when bruised. This sample, however, did not turn yellow. Nor did it match any of the poisonous varieties in the standard field guides to mushroom picking in the UK. Leech’s microscopic analysis provided equally inconclusive results, with spore shape and size failing to indicate any poisonous fungus known to grow in Norfolk.

After five years in Leech’s store cupboard as an unidentifiable specimen, Edwards contacted Leech for some fungus samples for this year’s Year 10 Science Camp. After a day of lab training, the fourteen-year-old school students worked with Edwards to sequence the DNA of this and other mushroom samples.

Phoebe Ellwood from Framingham Earl High School in Norfolk and Sophie Royal from The Ecclesbourne School in Derbyshire received the poisonous mushroom sample to sequence its DNA, working with Anne Edwards.

Ellwood and Royal checked their sequence results against an international genetic database, to find the species was a variety common in continental Europe. The mushroom is rare in the UK and never previously found in Norfolk.

The results of the study in are published in the October edition of Field Mycology, acknowledging Ellwood’s, Royal’s, and the rest of the year 10 group’s essential contribution to the discovery. “It was absolutely brilliant to have the students working on the sample,” says Leech, who is also a retired teacher from Gresham High School in Holt.

“It’s just amazing and there’s a massive buzz around everything,” says Royal. The Science Camp “opened my eyes to all the different opportunities that there are,” adds Ellwood.

It remains unclear how the continental mushroom came to be growing in the Kelhams’ back garden. The species has never before been found growing in Norfolk, although very occasionally found in the midlands or south east England. Tiny fungal spores can be easily transported by people and vehicles, offering one potential route from the continent. Alternatively, several species have been known to spread in the woodchips used in gardening, earning the nickname “woodchip aliens.”

The introduction of new species to the UK means even knowledgeable foragers may be unable to adequately identify mushrooms, as only genetic analysis may be able to distinguish edible varieties from their poisonous counterparts. “Even someone knowledgeable about mushrooms may well have made the same mistake as the Kelhams, who I think were just really unlucky,” says Leech.

The difficulty that even an expert mycologist faced in identifying the poisonous species emphasises the danger of fungal forays.