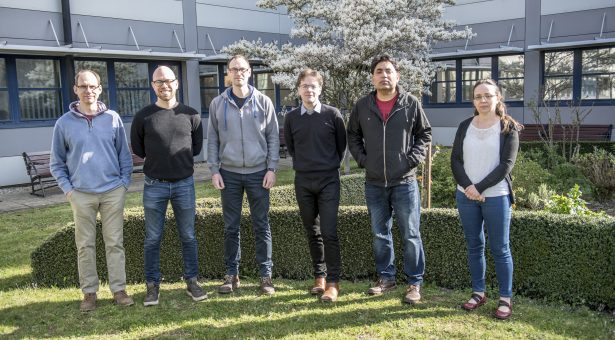 We sat down with Dr Matthew Hartley, head of our Informatics team, to talk about his team, their work and their position straddling the borderline between science and computing.

From gathering that initial electronic data, through to some kind of scientific understanding, involves an awful lot of processing and computation. What my team does is work at the interface between science and computing, to get that data from its raw form, into its refined form; the form at which we can get the scientific interest out of it.

With that in mind, I am always telling people, to come and talk to us BEFORE you have started to gather the data, because the experimental design you use is very important for a number of reasons…

There are rules, both written and commonly accepted within the reviewing community, so when you measure something you need to measure it a number of different times, on some slightly different plants, otherwise there is a risk that you hit a plant that is odd in some way and then try to apply what you have found on that plant on a broader scale. We can help with those things and advise on, for example, how many replicates you need in order for data to be publishable.

Sadly, it is quite common that people will come to us with lots of data they have painstakingly collected, and we have to break it to them that they won’t be able to publish it because they didn’t get the right number of replicates, or they didn’t control for certain things.

I think, that sometimes the computational aspect of things can seem intimidating, but often it is actually a lot of fun. These are skills that are only going to become more important for scientists in the future, so come and talk to us and get involved.

Before I led the Informatics team, I was a scientist. My first degree and then my Masters were both in Physics. I then did a PhD in Computational Neuroscience, which moved me slightly into the computational domain. From there, I initially moved into Commercial IT, but I missed the science-aspect of things, so when the opportunity came up I joined the John Innes Centre to sit on this borderline between science and computing.

One of the things I am most interested in is bioimaging analysis, which is the data transformation process of how you start with microscopy data, say an image of cells, and go on to get interesting data out of that. For example, working out the size of cells or seeing if we can find out whether genes are activated, by which parts of a cell in an image are fluorescing or not.

We are currently working with Professor Martin Howard and Professor Caroline Dean’s groups, who are collaborating on a project looking at epigenetics in the context of vernalization; how plants need a certain period of cold, in order to flower. They’re showing that vernalization is an epigenetic process which involves looking very closely at images of root leaves and showing that there is a particular pattern of fluorescence within particular nuclei. Observing this involves very tricky image analysis and ultimately the development of a couple of new techniques to look at that and extract the right data. The work is still ongoing but so far, we have had a couple of papers published; one in e-Life and one in Science, which is very exciting.

Within our work, just like all of science, there is a mixture of ‘Eureka’ moments and more gradual incremental progression. I remember in the work with Martin and Caroline’s groups there was a special ‘eureka’ moment. We knew what pattern we were looking for in the data, but we weren’t seeing it. Then we changed the way we were approaching the problem and suddenly there was the pattern.

There are a lot of days in science where you almost feel like you are having ‘anti-eureka’ moments because you feel like you are going backwards. Often, the fact that something doesn’t work is interesting. An awful lot of scientific discoveries came when people didn’t get the results they were expecting and then by digging into what was really going on found that something new and unexpected was going on.

There are currently six people in the Informatics team, and we are about to be joined by a seventh. We have a real mix of skills with backgrounds ranging from bioinformatics, computer science, biochemistry and a couple with backgrounds in IT and mathematics. It is more common, at least in our Informatics team, for people to have a science background and move into computing, rather than the other way around. That’s not to say it’s not possible however.

We do a lot of bioinformatics training, which is open to all scientists on the Norwich Research Park. However, most of our project work is with scientists within the John Innes Centre, although often of course, their projects are run with external collaborators, so we get to work with a broad range of people.

The research groups here have very different levels of requirements from us, all the way from designing the best experiments to extract the data they need, through to providing the tools for scientists to do the experiments they have already planned. A run-of-the-mill desktop computer isn’t built to handle some of the high-end projects we are working on, so we also have some powerful infrastructure that we manage and provide training on which people are encouraged to come and use.”