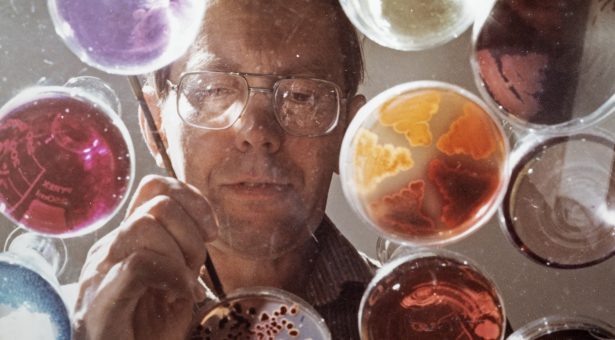 Sometimes an adventure in science history begins with a chance find in a junk shop.

In the summer of 2021, a member of the public found a framed 1984 photograph of Professor David Hopwood in a shop in Surrey. We don’t know how it came to be there, but we were delighted to be able to acquire it for the John Innes Centre Archives where (now Professor Sir) David Hopwood’s papers are housed.

Although the photo has a press release pasted on the back, we wanted to know more about the circumstances behind this specially commissioned image.

The first port of call was David himself. His records were able to take us back to 1984 – 85 and some of the background behind the making and reproduction of this image.

The story begins with a request for David to give a 40-minute talk at the British Association for the Advancement of Science meeting in Norwich on Friday 14th September 1984.

The British Association (BA) had only visited Norwich on three previous occasions (1868, 1935 and 1961). Their fourth visit to Norwich would take place for the first time at a university venue (the University of East Anglia was by then twenty years old), with the visiting delegates able to stay on campus for the princely sum of £11 per night.

The largest scientific meeting of its kind in the UK, the BA’s typical audience was described then as “scientists and technologists from disciplines other than that of lecturer, representatives of industry, commerce and the professions, teachers, school students and university students, and the general public with an interest in science, its applications and implications.”

At the time, in the week of the BA meeting, the national press devoted more column inches to science than at any other time of year.

However, this brief abstract doesn’t reveal the breakthrough that David was about to announce. His team at the John Innes Institute had produced the first hybrid antibiotic by genetic engineering.

David had an advance publicity call from the BA press officer- could David provide 70 copies (‘photocopy or stencil’) of his finished paper and a 1-page abstract for distribution to the journalists and broadcasters attending?

The next request was from Nexus, the UEA Student Union television service (dubbed  ‘Norwich’s secret TV channel’). Nexus had its own studio in the Student Union building, and a low power transmitter enabled them to broadcast to the TV viewing rooms at the end of the building and some of the halls of residence, but the audience was primarily students who would watch at lunchtimes on closed circuit TV in the foyer of the Union building.

Nexus had secured an agreement with the University to provide a TV and information service throughout the BA conference and wanted to pre-record a short informal interview with David to be shown the day before the address.

He responded to these requests by phone or post, this was before the advent of email.

So, what was the breakthrough that David’s paper was about to announce to the world and why was it important? David later described this piece of work as the closest he got to a ‘eureka moment’ in his career (as recalled in 2011 in an interview with Professor Tony Maxwell for BBC’s ‘Bang goes the theory’).

David’s work centred on the genetics and microbiology of a strain of Streptomyces coelicolor, an Actinomycete. This group of soil-dwelling bacteria had originally fascinated biologists because they appeared to be intermediate between bacteria and fungi.

That taxonomic question was solved in the 1950s when it was confirmed that they are true bacteria and only resemble fungi, growing in mycelial colonies with aerial hyphae and spores (to the naked eye they have a fuzzy appearance like mould when grown on an agar plate).

It was the knowledge that these microbes could provide valuable drugs for medicine that spurred many laboratories to continue studying them.  Actinomycetes secrete antibiotics in nature to help them compete with other microorganisms living in the soil.

The discovery of Streptomycin in 1943 (isolated from a strain of Streptomyces griseus), the first effective treatment for TB, resulted in the setting up of drug discovery labs around the world, mostly in pharmaceutical companies.

For many years the key to finding new antimicrobial drugs was to look at the natural products of the soil. By 1984, streptomycetes had yielded more than 70 commercially important antibiotics, but it was thought that most of what the soil had to offer had been developed.

The hunt for new drugs was becoming harder and harder. David Hopwood’s breakthrough offered an alternative approach – the possibility of making ‘unnatural natural products’ to extend the range of available compounds.

Genes for antibiotic production were first cloned from the ‘parent’ strain of Streptomyces coelicolor. The cloned genes were introduced into another streptomycete, one that usually makes a brown coloured antibiotic called medermycin.

The genetically engineered streptomycete then began to secrete a new, purple-coloured antibiotic (mederrhodin A) – made by both sets of genes working in ‘collaboration’. Spectroscopic analysis by Professor Satoshi Ōmura’s group at the Kitasato Institute, Tokyo confirmed its hybrid chemical structure.

The appearance of the purple colour was David’s ‘eureka moment’. The experiment had demonstrated the exciting possibility of creating new compounds by transferring genes between different organisms that make different compounds.

Scientists had already mastered the trick of getting one species of bacteria to manufacture a compound normally made by another species (by gene transfer), indeed David’s lab had first demonstrated the cloning of the complete set of actinorhodin genes in this way, but producing a totally novel compound by genetic engineering, this was new.

With this experiment the new pharmaceutical field of ‘unnatural natural products’ was born. These methods also offered the prospect of cloning genes controlling rate-limiting steps in antibiotic biosynthesis, which could improve yields in antibiotic production.

This work was only possible because there had been three decades of prior research to gain a detailed knowledge of the genetics of streptomycetes (starting with David’s PhD studies in Cambridge in the 1950s), and the recent development of effective methods for the isolation and manipulation of Streptomyces genes. But that’s another story.

David’s archive enables us to track some of the papers that covered the news of the discovery. The first UK clipping is from Hospital Doctor on 20th September 1984, soon followed by The Economist (22nd September), then the New Scientist (4th October) and The Scotsman (28th November).

It is likely that the UK publicity was generated directly from the BA meeting, but David’s paper also had an interesting afterlife, and the picture from the junk shop is the clue to it.

The Central Office of Information (COI) wanted to organize some publicity on the new hybrid antibiotic, and commissioned two colour photographs of David, one where he appears above a table of petri dishes (pictured here) and another where he is seen working with an array of lab flasks (the original of this second image has not yet been traced).

The COI was a government communications and marketing department (successor to the Ministry of Information) that provided publicity for other organisations in the public sector and was especially tasked with promoting British inventions and discoveries overseas.

It was after their involvement that news of a hybrid antibiotic breakthrough began to travel around the world. The COI photographs were published for the first time in January 1985 in the Arabic language press (Anwar and Amal in Beirut). Illustrated articles afterwards appeared in Trinidad, Jedda, Bogota, Montevideo, Germany, and France.

The formal announcement of the hybrid antibiotic discovery was made in Nature in April 1985 , recording the contributions of Hopwood, Malpartida, Kieser, H. Ikeda, J. Duncan, I. Fujii, B.A.M. Rudd, H.G. Floss and S. Ōmura.

An American group, led by Professor Heinz Floss at Ohio State University, Columbus, had characterised a second hybrid antibiotic made by a strain arising when David’s group had transferred actinorhodin genes from S. coelicolor into a culture making another blue compound called dihydrogranaticin, but this did not give rise to a change in colour, so it was not so dramatic as the mederhodin case.

That 1985 landmark was the catalyst for the introduction of genetic approaches that transformed natural product chemistry (see for example, L. Katz speaking for the Society for Industrial Microbiology in 2003).